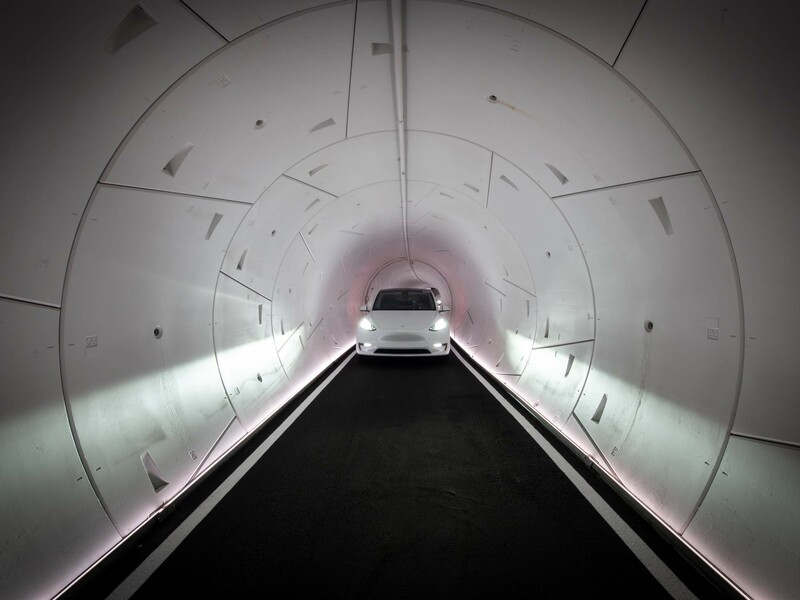 When Elon Musk announced way back in 2016 that he was starting a tunnel boring company because he was frustrated by Los Angeles traffic, the idea was pretty broadly mocked. Sure, there was probably some minor innovation that The Boring Company could bring to the tunneling business, but to just make another path for even more cars? That's pretty low on the priorities list in solving transportation gridlock. And that's not to mention that we solved transportation tunnels long ago: subways.

So I didn't pay much attention to the Boring Company's efforts — often a project would be announced and then end up floundering in regulations or spiraling price estimations. But one project did happen: the a simple tunnel loop at the Las Vegas Convention Center. The LVCC hosts multiple huge conventions ever year, including CES, CONEXPO, the Magic fashion show, AAPEX automotive show, and more. To host these shows with thousands of booths and hundreds of thousands of attendees each, the LVCC is utterly massive. With four huge halls containing 4.6-million square feet of floor space, a walk from the back end of the south hall up to the new west hall covers 1.1 miles and will take the average person over 20 minutes. In short: it's massive.

This is stupid, right? Why is Elon trying to reinvent the subway?

It cost nearly $50 million for The Boring Company to drill a set of tunnels under the convention center, with stops at the far ends of the complex and one in the middle. The filled the tunnels with electric Tesla Model 3 and Model X cars, and a bunch of human drivers to pilot them down the tubes. It's a stupidly simple system: there's no autonomy happening here, there aren't any platforms you have to navigate based on your destination, the vehicles are even just street cars — there's not even any special software running on these cars.

"It's a gimmick," I thought. Just a tech demo to show what The Boring Company can do. So last week when I was at the LVCC for CES, when I passed by one of the Las Vegas Loop stations I just shrugged. Until my last day at CES, when I was wrapping up my day trawling the halls for the most interesting things of CES and my ankle started to hurt. I wanted to take the free bus back my hotel, but the pickup point was on the opposite end of the convention center. I could make it, but... there's this tunnel station right here. "What the heck," I thought.

So I took the escalator down to the subterranean central hall station, a cheerful guy wearing a LOOP sweater asked where I was going (south or west), then directed me to a spot where a Tesla had just pulled out, I was joined by two other convention attendees, and less than 30 seconds later there was another Tesla pulling up. We got in, buckled up, and a moment later we were on our way down the tunnel. It's not a wide tunnel — just enough to fit the car and open the doors if necessary. Just a few minutes later we pulled up at the west station, we got out, and headed up to the surface.

Wait, I think this could actually work.

It was so mundane and quick that I didn't even have time to really think about it before I was more than half a mile away from where I started. It was simple, seamless, and I didn't have to put in any real effort. But I then had plenty of time to think about it as I waited for the bus that I'd just boarded to take me to my hotel — it took over 15 minutes to make for the bus to travel less than a quarter of a mile to the main drag. There were simply too many cars trying to make their way around the convention center and down Las Vegas Blvd.

Sitting there, not moving, it finally clicked for me. This silly system of tunnels could actually work.

And Clark County, the home of the Las Vegas strip, agreed, contracting with The Boring Company to expand the Las Vegas Loop to cover everything from Fremont Street in the north down to Mandalay Bay in the south, and looping out to the Palms and the airport.

Expanding and moving forward with plans for the "Vegas Loop." #ClarkCounty Commissioners just approved an agreement with the @boringcompany to establish and maintain a transportation system that will go under the Las Vegas Strip. It will also go to @AllegiantStadm and @UNLV. pic.twitter.com/2ju3xcFq7O

So why not a subway? Valid question. It's a tunnel, you could easily install a set of rails down the middle and put an articulated train on it, then let it run down that path and stop at each station along the way. Bam, proven model that we all know works. But that subway train still has to stop at every station, because you don't know how many people are going to get off or on at any stop. And because of that they carry more passengers on each train and thus each station on sees a train every several minutes at most.

Heck, there's even a Las Vegas Monorail — an elevated rail that connects multiple casinos and the convention center, but it's struggled with getting funding to fully reach its potential. And even then it still has the same problem as subway — large trains that have to stop at every station.

The Las Vegas Loop model is perfect for this sort of compact, high-volume environment. There are only so many spots that visitors want to go: casinos, the convention centers, the sports venues, and the airport. And the grand plan for the Loop is to connect all of that, free from all the traffic that defines the Las Vegas Strip. And while the use of off-the-shelf Tesla vehicles was a choice to get the system running cheaply and quickly, building out a fleet of dedicated vehicles with some autonomy to make these trips, or even just carry a few more passengers per vehicle, would take this to the next level.

I was really skeptical of Elon's Tunnels™ before this ride, but now I'm convinced: when applied the right way in the right environment this model this could revolutionize transportation. There is a place in our world where this kind of system makes sense alongside traditional trains, subways, busses, and individual cars on paved surface roads.