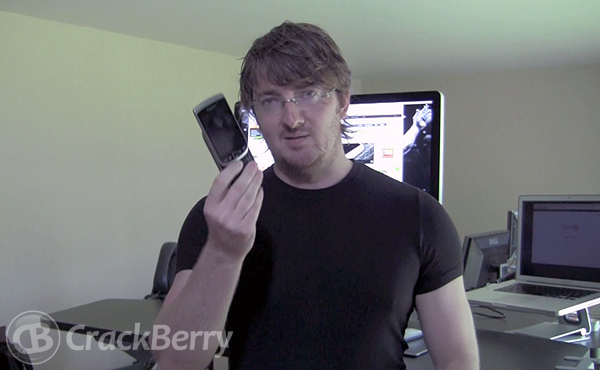 Hair Strike! It's true, I'm growing out my hair until BlackBerry 10 is released. Hurry RIM!

So my plan was to write this post yesterday, but it turned out to be a Sunday of sports instead. I kicked off the morning with 13.5 mile jog (running the half in the Manitoba Marathon next Sunday), then took in the Italy - Spain matchup (EURO2012), then it was Formula 1 time with the Canadian Grand Prix, then the Ireland - Croatia match. After all the excitement the last thing I wanted to do was sit and type. So with my thumbs well rested, I'm pumping this one out on a Monday morning.... So Happy Monday morning y'all, let's get to it!

On the BlackBerry news front things were pretty quiet last week, though we did see lots of Research In Motion in the headlines again when the stock dipped below $10. Not exactly the kind of headlines we like to see. Between now and the release of BlackBerry 10 later this year you almost get the feeling that no news is good news for RIM. They need to just fly under the radar and get work done without distraction.

This week should make for some interesting BlackBerry stories though. Our own CrackBerry Zach is actually in Waterloo visiting family as I type, so we're hoping while there he'll be able to report back with a story or two. And later this week he'll be in Toronto for the grand opening of Canada's first Porsche Design store, which will no doubt be selling the exclusive and expensive Porsche Design BlackBerry. I'm also tracking a story about iOS apps running on BlackBerry, and in talking to the developer behind it things are actually looking pretty real. More on that coming soon.

In case you missed it, my favorite post of last week was asking CrackBerry Nation what they're looking forward to most in BlackBerry 10. The post got a huge response with a lot of great input. I'm going through all of it and will break down into a condensed top 10 this week. If you haven't dropped in a comment yet, do so. And stay tuned for the followup report.

While things may be a bit slow at the moment on the BlackBerry news front, I'm busy as all heck thanks to the Mobile Nations World Tour. The month of June has me trying out Android. It feels like I'm in school again, learning absolutely as much as possible as fast as possible. There won't be an exam at the end, but I will be doing up my full report of what I have learned and experienced. In the meantime, I am making some posts on our sibling site AndroidCentral, so if you want to stay on top of it you can follow my blog there as well. It's our first time attempting this type of a World Tour type of event so we're very much feeling it out, but overall it seems to be extremely well-received so far. I think everybody agrees that knowledge of the competition is a good thing.

Brace yourself for an onslaught of Apple News...

This week is Apple's World Wide Developer Conference, and in a few hours will be the keynote address, which means the interwebs will be flooded with Apple stuff this week. The iMore team is on hand and will be reporting back on things live. There's been lots of speculation about what we'll see... iOS 6, etc.

Honestly, I only care about one thing getting announced, and that's a new/updated Mac Pros (the desktop computer). I've been waiting forever for a new one to hit the market, so the second that's available I'll be ordering it. I want to take my standing desk command center to the next level.

I'm going to finish this one off with a question.... what day would you like to see the From the Editor's Desk post hit the homepage? Mondays when things are busy? Sundays when things are quiet? Maybe Friday's to get ready for the weekend? Let me know what you prefer and I'll *try* and stick to it.