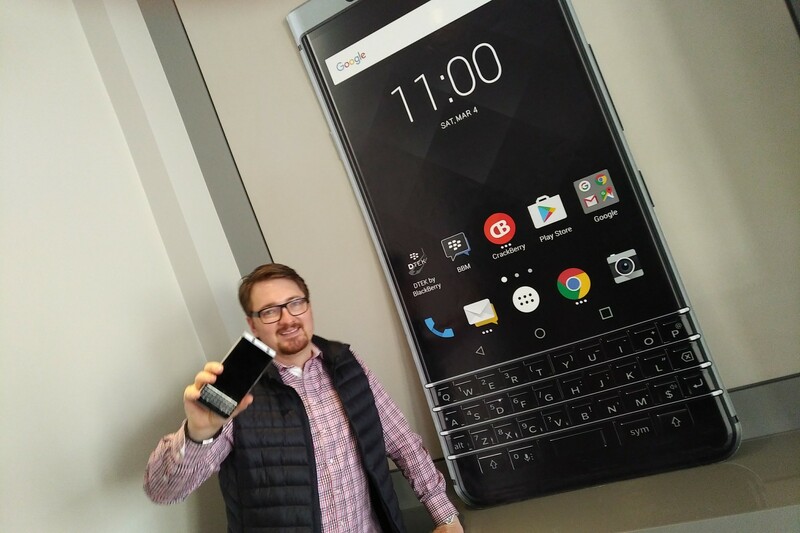 I'm back on Canadian soil after what was a crazy, busy, awesome and hella fun stint in Barcelona for Mobile World Congress.

While in Barcelona we celebrated CrackBerry's 10 Year Anniversary with a meetup which included TEN CrackBerry members flown in from around the world. If you missed James Nieve's recap, you should read it - memories made for life!

Flying home from Barcelona, I'm fortunate to have with me a BlackBerry KEYone to use. As it's still a pre-final production run unit, I won't be posting any sort of full CBK-style review of it just yet (our full review will go up at the same time as other publications when that happens), but that doesn't mean in the meantime we can't have some CrackBerry fun with it.

Case in point, on Saturday evening we held a CrackBerry Meetup in Toronto where attendees had a chance to go hands-on with the KEYone. Honestly, when I put out the word on this, I thought we'd have 15-20 BlackBerry fans RSVP. Instead, we had 180 people RSVP in the first 24 hours. Considering I put out the word before having a venue booked, I had to cap the RSVP limit at 180 people - I'm pretty sure if I left it running we would have had more than double that RSVP!

The meetup was a HUGE success with a fantastic turnout. From 6pm to 12:30am it was BlackBerry fans past and present packing the venue and feeling totally at home with each other, talking BlackBerry, playing with the KEYone and having a blast.

I've been loving the KEYone these past ten days, so for me it was exciting to see so many other people also declare it AWESOME. I'll be following up with plenty of thought pieces soon going into the details of why the KEYone feels like a winner and should be your next phone.

Recovering from the meetup Sunday morning though, I only had one thought going through my head... THAT WE NEED TO MAKE THIS HAPPEN AGAIN ASAP IN AS MANY PLACES AS POSSIBLE!

I'll be blunt. If the KEYone was a dud I'd be going back into CrackBerry Retirement right now. February was a blast as we celebrated 10 years of CrackBerry, but it was a big stretch for me beyond my normal work/husband/life duties.

The thing is, the KEYone rocks. And the more people I witness using it, the more I'm confident that this is a BlackBerry that's going to find a big audience of owners that love the hell out of it and put BlackBerry Smartphones back on the map. And there's nothing I'd like more than to make that happen. Which means I'm making it my personal mission to make sure I get my KEYone into into as many hands as possible in advance of its official release.

What Cities Should I Visit Next?!

So with that, I want to know.... where should CrackBerry Kevin head to next?! New York? Vancouver? South By South West is kicking off in Austin, Texas this weekend - maybe I should head there?

For efficiency's sake, North America will be the first region to tackle, but if we can make this happen together, I'll do my best to make it a CrackBerry World Tour. I met so many great people on Saturday in Toronto - I'd love to meet all of you!

So hit up the comments with where you think I should head to next. If you haven't yet, be sure to Sign up for BlackBerry KEYone updates -- and when you do, let me know what city you live in -- that'll help me plan things out!

Hope to see you soon, LITERALLY.