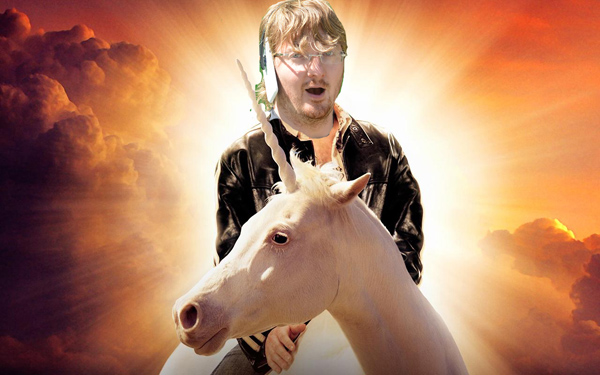 We're talking animals in this week's From the Editor's Desk. Unicorns and Jaguars. You can blame my dear pal and fellow Editor in Chief of our sibling site Android Central, Phil Nickinson, for the photoshop job above. Yes, that's me... riding a unicorn... with a HTC One X strapped to my head via a GoJo. Creepy.

While the unicorn doesn't have a name yet, the jaguar we're going to talk about this week does. It goes by the name of Vic Alboini.

There *is* an explanation to the picture at the top of this post, which you'll have to watch the video below to fully understand its genesis. In this week's Monday Brief all of the Mobile Nations EiCs spoke about their biggest news stories of the year. Good times. On the BlackBerry side of things I picked RIM's new CEO Thorsten Heins and the exit of RIM's longtime CoCEOs, Jim Balsillie and Mike Lazaridis.

I've always loved the Lloyd Android mascot that Android Central has (you can even buy him on a t-shirt now). Maybe it's time CrackBerry get its own mascot. Not sure if a Unicorn would work though... though we've been waiting so long for BlackBerry 10 already that maybe a Unicorn is kinda fittting. Lol. What do you think? Do Unicorns and BlackBerrys go together? I'm thinking not based on the photo below... if you have better ideas for a CrackBerry mascot, toss them in the comments to this post.

In the next Monday Brief we'll be making our predictions about what will be the biggest story for our platform over the course of the next 12 months - you won't want to miss that either!

The only person giving more interviews to the media at RIM's Annual General Meeting of Shareholders this year than me was "activist shareholder" Vic Alboini of Jaguar Capital. When I give interviews to the media I typically gear my message on behalf of the of the BlackBerry user community - the owners and fans of BlackBerry. I'm often critical of RIM and don't sugarcoat the facts, but my message is always positive in that I only want to see RIM get better and succeed for the long haul.

Vic takes to the media with his message on the premise of being in the best interests of RIM's shareholders, which he often says he has the support of 8% or more of. RIM's stock has taken a beating over the past 18 months, so I understand there are a lot of angry shareholders out there and there will be a lot of agreement between shareholders and the things Vic tells the media.

That said, in observing Vic in action at the AGM and listening to what he does say to the media (and how he says it), I couldn't help but think that his approach is having the opposite effect. Between what he says and how it gets reported, his actions are actually damaging to RIM and shareholder value.

Since returning home from the AGM, Chris Umiastowski and myself have been doing a lot of research on this and are putting together a longer article that should be hitting the CrackBerry homepage this week. Though my initial instinct was to come out against Vic with CrackBerry guns a blazing, I decided we have to hold ourselves to a higher standard of journalism and write a productive piece and thus I reached out to Vic to hear his side of things. This Wednesday I spoke to Vic over the phone. Over the course of an 80 minute interview I gained a much better understanding of what's making Vic tick.

I don't want to give it all up here so will leave you in suspense... but you'll want to keep it locked to CrackBerry this week. This is CrackBerry journalism you won't want to miss.

Unicorns and Jaguars aside....

More Video Commentary on the Way - If you missed last week's from the Editor's Desk, check out the video above. Instead of writing I just spoke to the camera. No script. No editing. One take, Done. I received a lot of great feedback on that format, so will do more of that on the site going ahead. One person told me it was very Rex Murphy like (he's a well-known Canadian political / social commentator). I didn't overthink it before recording last week. I just sat in front of the camera and hit record and said what was on my mind openly and honestly. Reflecting on it though, I can see why this kind of commentary in a video format is so highly regarded. It's impossible to fake. You have to know your stuff and you have to be able to express it on the fly. It's the true test for any tech blogger.

Kisses for Keian - One of our longtime contributors, Ryan Blundell, let us know that his son Keian was recently diagnosed with Leukemia. Our hearts go out to Keian, Ryan and his family. If you missed our post early this week on it, please read Kisses for Keian.

Happier CrackBerry Forums - I made a few subtle changes to the CrackBerry forums this week which I think are for the better. Check out this announcement and this announcement for the details. CrackBerry's forums have been a little crazier than normal lately (and understandably so... waiting until 2013 for BB10 is hard!) so these changes should help keep the focus on BlackBerry and the good in the meantime.

The Mobile Nations World Tour Continues - I took a break from my stop on Android so I could rock a BlackBerry Torch on my annual trip to Waterloo and BlackBerry HQ. I felt so home being on BlackBerry again I didn't want to switch back. Friday night I finally went back to the HTC One X. I have a couple more articles to get up on Android Central and then will do a final Kevin's take on Android story / podcast. That'll all happen over the next couple of weeks, then I think I'm going to be giving a Lumia 900 a try.

Visitors This Week - I have some guests coming to Winnipeg this week. Phil Nickinson, Rene Ritchie and Daniel Rubino will be hitting the Peg! You're likely familiar with the names, but if not, they are the Editor in Chiefs of Android Central, iMore and WPCentral. On the agenda? I could say we're making plans for world domination, but I think our Mobile Nations sites are already doing just that. So let's just say we'll be talking about how we can continue to do what we do, even better. And I'm sure we'll also be drinking. Afterall, it is summer. All work, no play, makes for a boring tech site. Maybe we'll fire up a couple of video cameras and record a podcast. That'll be fun!

Until next week.... keep your thumbs on your BlackBerry and reach for the stars! (god that was lame. I'll try better for next week... promise. Lol).