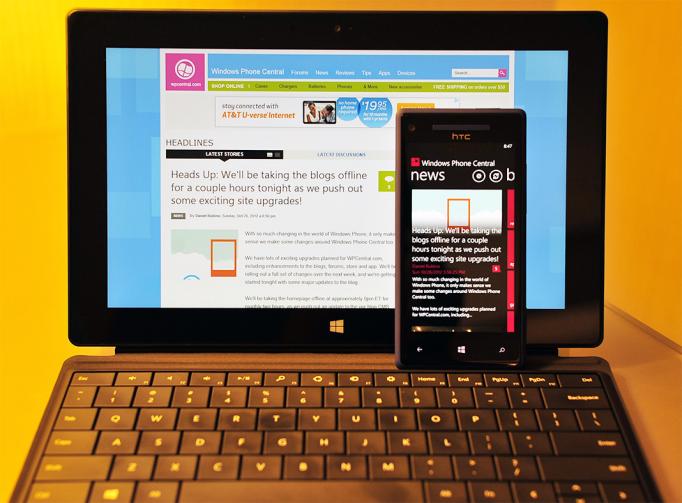 As I type this week's From the Editor's Desk post on a Sunday night/Monday morning at 4:30am, it's not BlackBerry that I'm thinking about at the moment, but Microsoft and Windows Phone.

Later today Microsoft will officially be launching Windows Phone 8. Our sister site Windows Phone Central has been long overdue for a site refresh, so we pushed out a big round of upgrades tonight - an updated site to celebrate the launch of an updated phone OS. We pulled the trigger a few hours ago and have been dealing with the usual post launch fixes, but things are nicely under control now. I *should* be heading to bed, but Miss CrackBerry needs a ride to the airport at 5:30am for a work trip, so I figured I'm better off staying awake at this point. If my typos are worse than usual in this post, forgive me, I'm writing this with blurry, tired eyes.

Hanging out on our Windows Phone site all night working on the relaunch, I couldn't help but notice the parallels between our two communities at the moment. The Windows Phone community has been waiting with high expectations of Windows Phone 8 just as we're waiting with high expectations for BlackBerry 10. I'm a little envious of them as I can't help but have those feelings that we should be going through pre-launch excitement right now too. When I committed back in April to growing out my hair until BlackBerry 10 phones became available for sale, I was under the impression we'd see BlackBerry 10 hit in Q4 2012. In other words, I should have been getting a haircut any day now. But new Windows Phone 8 phones (that's weird to type and say) will be available for purchase in just a few days, and I still have a few months of waiting and hair growth to endure for BB10.

As much as the waiting sucks, I've come to terms with it now, as I think a lot of CrackBerry users have who have made the committment to stick it out for BlackBerry 10. I still have a lot of faith in the launch of BlackBerry 10. The sooner it gets here the better of course -- RIM is losing out every single day that BB10 is not on the market -- but get here it will. And when it does, I'm confident people will buy it. BlackBerry has 80 million subscribers today, and millions more that have left BlackBerry but are keeping their eyes on BB10. Even if you take a pessimistic cut of those people as looking to upgrade, it's still plenty of volume to get BlackBerry sales rocketing again in 2013.

Thinking ahead to the success or failure of Windows Phone 8, it's hard for me to make a prediction as to which way things will go. Looking back at Windows Phone 7, it's almost laughable at how poorly it did. As I told Dan Rubino on our last Mobile Nations podcast, which he couldn't really argue with, BlackBerry left the door wide open for Windows Phone the past 18 months, and Windows Phone did nothing with it. They didn't outsell BlackBerry and they didn't make an impact with the average mobile consumer, despite putting a giant Windows Phone in Times Square.

I think part of the issue Windows Phone 7 suffered from was a lack of a clear value proposition. To the average user walking down the street, they didn't know why they would or should buy a Windows Phone. Heck, there may have been an awareness problem too - I'm still not sure the average person knows what Windows Phone is. When the average person hears the name Windows, they're more likely to thing of an old work computer they hated using rather than a phone they want to run out to buy.

On the other hand, the average person has always had an understanding of what BlackBerry is about. They think business. They think communication. The average person has an understanding of the iPhone. It has apps. It's easy to use. And Android has gained mindshare too - they have phones with BIG screens, it's hackable and it has lots of free apps. Whether these stereotypes are right or wrong or only partially correct is somewhat irrelevant... what matters is that people at least have in their minds a clear idea that the phone is about something, and this is enough to attract a person towards a platform. The platform stands out with a purpose in the mix.

Apple has only ever had the iPhone. All of the marketing dollars and brand equity go into that one phone. If you look at another currently successful device like the Galaxy S3, it's doing well from a sales perspective for similar reasons. I'd argue there are better Android phones on the market, but the fact the S3 is pretty much available on all carriers and has been marketed like crazy, it has risen above the noise of Android to gain recognition with the average consumer. People get that it's a good phone, with clear differences to the iPhone experience.

I can't help but think Microsoft would have more success with making Windows Phone 8 successful if they had just one great Windows Phone 8 phone out there. It would keep things simple for them. And there are rumors now that Microsoft will build their own Surface phone as they have their own tablet.

Despite being a little late to market, I think RIM will have a slightly easier time making the average customer aware of the value proposition of BlackBerry 10 phones than companies will have with Windows Phone 8. Everybody knows what BlackBerry historically has been known for. Launching BB10 will be a chance for the company to fill in all the gaps. RIM will be able to say YES, we still have the best keyboards -- whether keyboard or touchscreen -- and we also have apps and a great modern UI (and a bunch of other stuff that's unique to BB). It's a phone for people with priorities who do. It's not a phone for everybody, but for the people it's for, they'll get it and want it and buy it.

I feel like Microsoft is going to do the opposite with Windows Phone 8 - they'll try and make it appeal to everybody, but in the end because the message isn't clear enough you'll just see people opt back for the choices that are more clear in iOS and Android, and in a few more months, BlackBerry.

And let me know what you think... Windows Phone 8... six months from now... is it a real contender, or just catering to the Windows hardcore and picking up some sales on the sidelines?