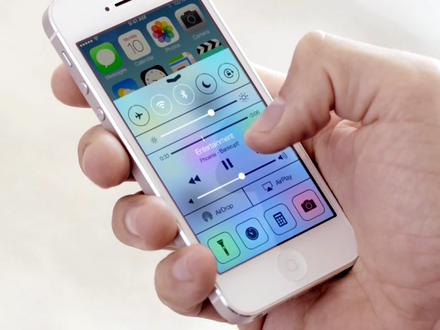 I have been a little quiet on the good 'ol CrackBerry blogs the past couple of weeks, ever since I went to NYC to interview Kristian Tear two weeks ago (almost to the hour!) for the launch of the BlackBerry Q10 in the USA. The following day was the amazing Talk Mobile Launch Party, upon which I pulled an all-nighter to catch my early Friday morning flight into Montreal for a weekend of awesome Formula 1 action. Coming home from Montreal on the Monday night, I promptly got sick, and last week turned into one of those useless weeks for getting work done.

I'm back on track once again and will be playing catch up this week on a long list of stories I want to get written for CrackBerry. And for this week's From the Editor's Desk, I want to focus by sounding off on Apple's WWDC keynote last week. A lot of you have been asking me for my thoughts on the keynote and Apple's announcements. I missed the keynote as it was broadcast live, but I **finally** dedicated two hours to watching it. There's lots to talk about today, so let's get to it!

Thinking back to a wonderful weekend of Formula 1

Before we get to the Apple stuff, I just had to share a few select photos from my weekend of BlackBerry and F1 in Montreal. Long time readers of CrackBerry will know that I'm a HUGE fan of F1 and I've been wanting to see BlackBerry sponsor a team for years. Going back to March 2007, literally just days after CrackBerry.com officially launched as a website, I wrote this editorial suggesting BlackBerry should sponsor an F1 team. It just made sense. It took a few years and a change in the management team, but it finally happened!

And I still think it was a great decision. On the world stage Formula 1 is massive, and BlackBerry did well in choosing Mercedes as a team. Looking at all the teams in F1 right now, it's just a logical fit on a brand level (it's aspirational, but still mass market - unlike Ferrari, Lotus, McLaren, etc.). Plus with drivers like Lewis Hamilton, Nico Rosberg and Ross Brawn as team principle, you just know the Mercedes car and drivers will show up on the camera a lot, and they certainly have this year.

With Montreal as BlackBerry's "home grand prix" of sorts, the company had a great presence in Montreal beyond the race track. On Rue Peel (aka. Peel Street), BlackBerry was out in full force, with lots of Z10 and Q10 demos being given. The awesome BlackBerry van was out on the street getting attention, as was a pop-up BlackBerry 10 trailer/kiosk. Mercedes and BlackBerry also setup a wicked exhibit on one street, where you could get in on the pit stop action and race the clock on a tire change. It was great to see.

While Saturday's qualifying session was rainy and wet, the weather was beautiful for Sunday's race. Sitting in Grand Stand 11, I recorded the first corner on my Q10 (see video above). Talk about LOUD. The audio recording actually overwhelmed the Q10's audio recording capabilities. I guess this is the ultimate audio recording test. Still some work to be done!

At the end of the race, Lewis Hamilton took the third step on the podium. Overall, another solid showing for Mercedes and BlackBerry, and the weekend was a whole lot of fun. Be sure to hit up the photo gallery.

When Apple takes to the stage, the whole tech industry pauses to watch what they've been up to. Adam already summed up where Apple swiped a thing or two from BlackBerry, and our sibling site iMore has been covering every bit of iOS 7 news coming out of WWDC in detail, so here I'm just going to throw out some of my random reactions, thoughts and takeaways after watching the event:

Watching the reactions across the internet after the keynote, and in talking to guy's like iMore's Rene Ritchie, it's been interesting to see how the people who follow Apple closely have responded to the show and the announcements. For the last few years it has almost felt like Apple could do no wrong, but with this keynote it's feeling like Apple is a little more human once again. With iOS 7 being developed in the wake of Scott Forstall's departure, it's clear that the company is hustling like mad to get it finished (building the plane while they fly it). Part of it feels polished. Other parts are untouched. The tablet version wasn't shown yet, etc. etc. It just goes to show that this is a hard business and it's always moving. This stuff isn't magic. Mobile tech takes a lot of hard work by a lot of smart people to make happen, whether it's BlackBerry, Apple or any other company in the space.

As the keynote relates to BlackBerry, I'll say again what I've said before. The opportunities and challenges for BlackBerry are the same in an iOS 7 world as they were in an iOS 6 world. BlackBerry has their loyal core user base and its on them to keep innovating, keep executing and putting out products that excite people.

I want to finish my post today with a rant on 10.1 STILL not being on AT&T and Verizon. Wait. You know what?! I'm going to dedicate a whole new post to that. This fragmented OS rollout stuff needs more attention and really needs to be addressed by BlackBerry. It's driving me nuts!