Apologies on my delay in getting up this week's From the Editor's Desk. I did spend my weekend at the office, but instead of writing I was cleaning it. I've been living and/or working out of the same home office setup for 12 years. I'm one of those people who's quick to buy things and slow to get rid of them. Suffice to say I have a few more weekends of cleanup ahead of me. But that's ok. Going through over a decade worth of stuff is actually pretty fun. It's a trip down memory lane. Finding old photos, books, magazines, clothes and of course, gadgets.

On the subject of old gadgets, tucked down in the bottom of an old box I discovered my long-forgotten first tablet computer - a Compaq TC1000. I bought this sucker back in 2002. I couldn't find the power cord to boot it up, but looking at this decade old design I couldn't help but think about how brilliant it actually is. Ten years later, I'd *love* to see a modern day tablet mimic this design. Check out the video above. The TC1000 actually combined both a keyboard and stylus/stylus holder into its design, in a slick folding / spinning setup. When I used to take it out in public back in the day, people would always stop and ask what the heck it was. Even today there's something futuristic about its design. Instead of a tablet with a keyboard/case accessory and a separate stylus (which can easily get lost), this put it all into one clean package. Check out the video above. Hmm... maybe we're onto something here for RIM's next generation PlayBook.

The new generation of tablet has mainly followed the iPad's flat slate lead, but we've seen many accessories become available to turn these flat slate tablets into more of a productivity device accepting additional methods of input than just a finger.

We've seen the Asus Transformer become one of the best selling Android tablets to date, thanks to its keyboard attachment that makes it into more of a lowcost laptop. And we've seen with CrackBerry fans that the BlackBerry Mini Keyboard case has become literally the most popular PlayBook accessory. In the iOS camp we've seen a ton of third party iPad keyboards and docks hit the market that also add a keyboard to the iPad (check out this review Rene Ritchie did for the new Ultra Thin iPad keyboard from Logitech, which is actually pretty slick). Obviously there is consumer demand for this kind of device.

I actually get sort of annoyed with some of these fold closed keyboard accessory designs that make tablets into a laptop of sorts. I can't help but think "just get a laptop already." But with a design like the TC1000, you actually have a device with a really distinct identity. It's actually more than a tablet or laptop. You can use it like a modern day tablet with the peripherals hidden and nobody is the wiser. Keep the keyboard sandwiched away and protected. Leave the stylus tucked away and hidden and in a place where you won't lose it (I love using a stylus, but I've lost a few already). Then when you want to bust out into full productive mode, the keyboard and stylus are right there, in a seamlessly integrated design (and there's no need to mess with bluetooth on this one - you could probably pack some extra battery juice for the tablet into the portion of the device that has the keyboard too).

I don't know.. maybe I'm crazy being so in love with this form factor of tablet, but I can't help but feel like there's something there. I wouldn't be surprised to see some Windows 8 tablets take to this design, but there's something here that feels like it could be BlackBerry-like too. With BlackBerry 10 being a "mobile computing" platform, we'll need to see at somepoint RIM put out some BlackBerry 10 devices that go beyond what they're doing today. A device like this could be a great flagship product down the road. To me it really does scream MOBILE COMPUTING. Yay or nay? Let me know in the comments what you think.

Other Fun Things Found While Cleaning My Office This Weekend... 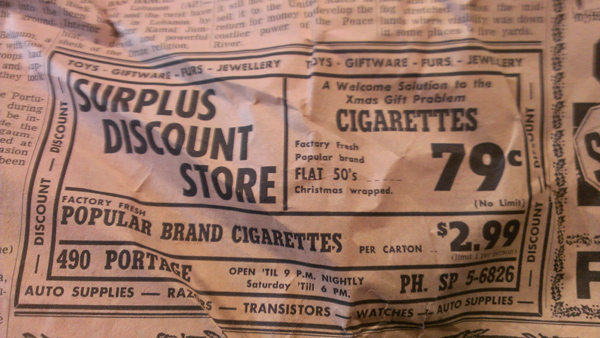 I found a newspaper from 1961 in the basement... man have times changed...
I couldn't help but laugh at this.
"A Welcome Solution to the Xmas Gift Problem... CIGARETTES!"

I found a half dozen "original" Winnipeg Jets stickers tucked away in a filing cabinet. Awesome.
Go Jets Go!

I found my picture of me and Arnold from when I went to the Arnold Classic in Columbus, Ohio

I found my Lifetime Achievement Award plaque in a drawer...
I was a bit of an over-achiever in Business School and kicked butt in Business Plan Competitions.
Kind of odd to receive when you're 24 years old, but awesome (it came with a nice check!).

Found with plaque... a copy of the U of M's 2003 annual report.
Above is from the inside cover (front cover here).

And you thought me buying a $500 clock app or
doing the Sexy and You Know it Workout video was crazy?
Back in university days my summer business was renting out Jet Skis.
One day I got dared to get my arms/chest waxxed so I'd look sexy at the beach.
I did it. I found the photo this weekend with the evidence. IT HURT. Never did that again.

OK. That's it for this week. It's a pretty quiet Memorial Day Monday so I'm going to keep cleaning my office up. Who knows what else I'll find to post on next week. :)