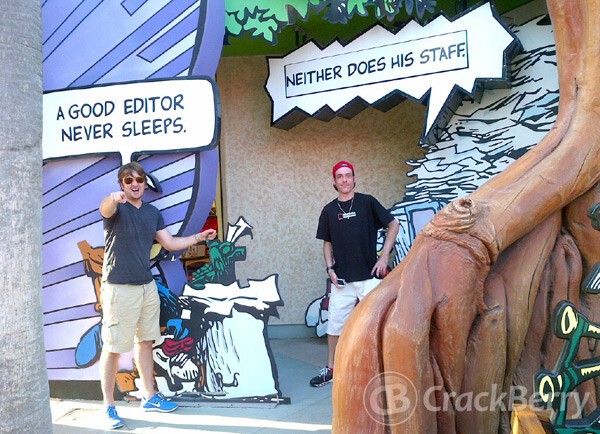 In case you haven't noticed, I'm having a blast "bringing CBK out of retirement" to celebrate 10 Years of CrackBerry this month. Being a little older and wiser, I think CBK 2.0 may prove to be better at the role than his 1.0 predecessor. We'll have to take a poll at the end of this month and see how I measure up to my old self.

The warm reception to the return of CrackBerry Kevin by sooooo many people has had me feeling gushy all week. I feel blessed and honored to be embraced by such a passionate community. Ten years has done nothing to tame down the CB community. It's as crazy (in a good way) around here as EVER. Everybody visiting CrackBerry does so with passion and strong opinions. We don't always agree on everything of course -- and that's OK -- as long as we respect each other. Passion and Respect are everything.

This week was a slightly chaotic one for me as I was traveling the past ten days and working remotely from hotel rooms. In between meetings and appointments, I spent my free time reading back through old CrackBerry articles, swiping through old photos and watching some vintage CBK videos. There's a lot of nostalgia in it all for me, as I'm sure there is for so many of you who have been around here since our early days.

The new excitement around CrackBerry is clearly the upcoming launch of the BlackBerry 'Mercury'. Somehow it seems fitting to spend a lot of time looking back this month at the CrackBerry/BlackBerry days of old while at the same time we start looking forward to the next era of BlackBerry.

There's always been a lot of mixed opinions in the community whenever we go through one of these major transitions. So many people hated the thought of BlackBerry 10 when they were still BlackBerry OS fans. Eventually, the majority of the community got excited for BB10. The next era of BlackBerry Smartphones will be Android powered and mixed in with a lot of members excited for 'Mercury' we see a lot of lingering/defensive love for BlackBerry 10 in the community. It's normal. It's not unexpected. And of course, anybody who prefers what was instead of what's next can always stick to the devices they have now. That said, I'm not one to live in the past. I've always been and always will be the kind of guy who keeps looking forward. So I'm ready for Mercury! More notes on how I'm prepping for it below, along with some other updates.

Alright. That's it for this one. How did I do?