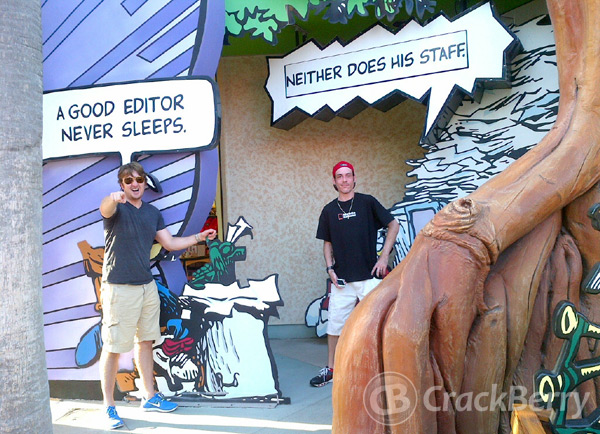 Welcome to the first edition of our new weekly feature, From the Editor's Desk. What is From the Editor's Desk you ask? Think of it this way... if CrackBerry were a magazine, this would be the Letter from the Editor at the start of each issue. It'll be a weekly dialog between me and you. Some weeks I'll get long and ranty. Other weeks I'll keep it short and sweet. What will we talk about? EVERYTHING.  I'll reflect upon the BlackBerry news of the week and make predictions of what we'll see in the future. Beyond that I'll sound off on other items of interest in the world of mobile and tech. I'll keep you up to date about what's going on behind the scenes to make CrackBerry and our other Mobile Nations communities even more awesome. I'll remind you of contests that are going on (yes, the contest to win my Porsche Design BlackBerry is still on!) and I may even get a little personal from time to time. Like I said, EVERYTHING.

Props go to our EiC Phil Nickinson over at Android Central for this one. He started this series there a few months back and has been bugging me to get it going on CrackBerry. With BlackBerry World 2012 now behind us there is a lot of excitement and a lot to talk about, so the timing felt right to kick it off. Let's get to it!

CrackBerry Killed It At BlackBerry World 2012

Seriously, I think it's going to take us a week to recover from BlackBerry World. Adam, Bla1ze, Chris Umiastowski and myself were in Orlando for the event, and we pretty much ran non-stop from the time we checked into the Marriott World Center to the time we checked out. If you missed any of the coverage, do yourself a favor and click back and read all of the BlackBerry World 2012 articles and BlackBerry 10 Jam articles. I was literally the first person to open the press room at 6am on Tuesday morning and the last to shut it down at 4pm on the Thursday. In between we put up over 60 articles from the event on the blogs.

If there's one must-read article coming out of the event, it's the editorial I posted -- Five Important Observations From BlackBerry World 2012 -- which really emphasizes what I think is the biggest takeaway from the event, and no, it wasn't the BlackBerry 10 preview we saw during the keynote. To me the biggest takeaway is just how much RIM has changed as a company. Between a new CEO, organizational restructuring and the knowledge that the launch of BlackBerry 10 *has to* be a success, Research In Motion, the company, is now firing on all cylinders and on a mission to win.

Heading into BlackBerry World, I wasn't actually certain that we would get any glimpse of BlackBerry 10 during the show. But RIM surprised us -- or me at least -- with a few teaser demos on the BlackBerry 10 Alpha device. We saw the BlackBerry flow experience in action, along with new touchscreen keyboard and a pretty killer camera app. I'm going to be following up this week with a deeper dive into each of these so don't want to get into here, but let's just say for now that I'm very happy with the direction of BlackBerry 10.

RIM has done a pretty amazing job until this point of keeping BlackBerry 10 under wraps. It was actually pretty awesome to sit in attendance at BlackBerry World and be totally surprised during the keynote. I liked the feeling. While of course I always like seeing the leaked stuff too (what BlackBerry fan doesn't?!), I'm sort of hoping RIM can continue to keep a tight lid on things as we near the release of BlackBerry 10 phones. Surprises are good. And I hope we keep getting surprised by BlackBery 10.

Where in the World is CrackBerry Kevin?

Normally I'll be blogging this up from my standing desk in Winnipeg (that's in Canada for those who don't know), but tonight I'm actually writing this from a hotel in New York City. Following BlackBerry World I drove out with Bla1ze and Michelle to Inverness, Florida on Friday, which is home to ShopCrackBerry.com and our awesome e-commerce team. We finally started receiving inventory of the in-demand BlackBerry Mini Keyboard, so was stoked to be there to receive them personally. Be sure to check out the video above!

It was back to Orlando on Saturday and the three of us spent some leisure time at Universal Studios, where I finally got to drink some Butterbeer at the Wizarding World of Harry Potter. And what better venue could there be to view The Avengers movie than there? If you haven't seen it yet, check it out. Good times. Now I'm in NYC for some meetings on Monday then it's back home on Tuesday. Finally. It feels like I've been gone forever.

CTIA is going on this week in New Orleans. I'm skipping this year, but we do have a few members of the Mobile Nations team there reporting on all the news. We're mainly expecting Android stuff (maybe a little Windows Phone too). But if anything exciting from BlackBerry does happen, Jared Dipane will be blogging it up here asap.