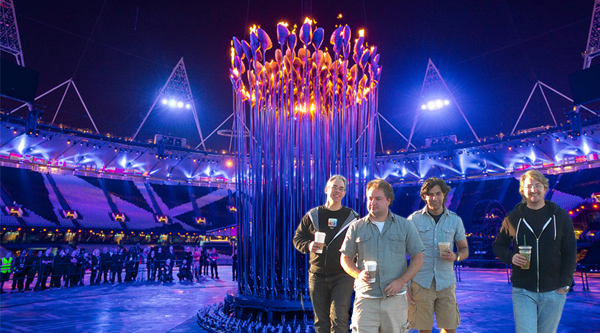 If drinking coffee were an Olympic relay event, the Mobile Nations EiC team would win Gold!

In last week's From the Editor's Desk post I gave the heads up that I would be busy this week hosting the EiCs of our other Mobile Nations sites. Making the trip into Winnipeg for our EiC Summit were Phil Nickinson of Android Central, Rene Ritchie of iMore and Daniel Rubino of Windows Phone Central, who just this month further upped his committment and is now running that community around the clock.

To say the time was well spent would be a massive understatement. Fueled by passion (and shot after shot of my signature Espresso with an occasional Starbucks and food run in between), we got a LOT accomplished. We communicate face to face frequently as it is -- Skype and Google Hangouts make it so easy these days -- but there's an energy and magic that happens when you bring people together in a room that no virtual environment can duplicate. Plans have made and we're all ready to execute. We'll be pulling the trigger on a ton initatives over the weeks and months ahead and into 2013. Get ready for it. Awesome stuff is coming your way. It's funny. I've been at this game since 2006, yet it feels like we're in start up mode yet again. We have a vision and we're on a mission. So let the games begin!

Last week I promised we'd deliver our Jaguar story. I ran out of time to get it done before the guys got here, so I'm going to keep this week's FtED short so I can get back on that. Look for it soon. In the meantime, be sure to click back to CrackBerry.com and through the last few pages of posts. The team kept the site BUSY.

Until next week... Keep Fit, and Have Fun!  (Ok, so that tag line is a rip off from Canada's Body Break commercials, but it feels fitting given the Olympics are on).