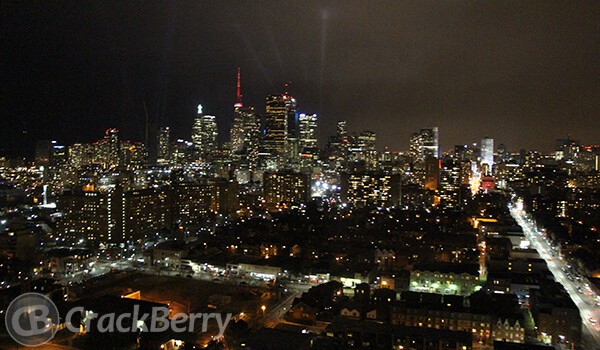 I was sitting in a condo high above Toronto, Canada, snapping the photo you see above and posting this from the editor's desk entry. I had arrived in the big smoke earlier that day with my (future) bro-in-law @jayhum, getting ready for what we knew would be a crazy month of work which we hoped would also have a little fun mixed in. The next day Adam Zeis, Bla1ze and Simon Sage all arrived in town, and we took possession of our one month condo rental which we dubbed CrackBerry's BlackBerry 10 Launch Campaign Headquarters.

Coming home from CES 2013, we decided to go ALL IN on the BlackBerry 10 launch. If you're reading this and were following CrackBerry at the time, you know the excitement we were feeling and the high we were on. Of course, part of that high wasn't related to the upcoming BlackBerry 10 launch event but rather what we were drinking... upon Bla1ze's demand we bought up every can of Full Throttle within a 45 minute radius of HQ, which kept us going around the clock day after day after day. :)

That month in Toronto was honestly one of the most memorable times of my life. There were so many great moments. Hell, there were even S P E C T A C U L A R moments (jump to 2m15s in the video below to see what I mean):

Though the BB10 launch in 2013 ultimately didn't pan out as successful as we had hoped it would be for BlackBerry, looking back I'm so glad we tackled the launch the way we did. We left nothing on the table. No regrets.

Looking ahead to 2014, BlackBerry is in a different situation. There's no BIG BANG launch to get hyped up for like there was last year (that said, I am really looking forward to the rollout of 10.2.1).

It's a new year, there's a new chief in town, and from my perspective, this philosophy of leaving nothing on the table is still in play, more so than ever. However, this year it will be a different strategy and execution on my end.

Many of you have noticed that the last few months of 2013 I was more hands-off on my day to day CrackBerry blogging than ever in the past. A BIG part of that was the need to shift my attention back to my other duties as Chief Media Officer of Mobile Nations (which I mainly neglected the first half of 2013 as we crushed the BB10 launch and got Talk Mobile off the ground). The other (smaller) part of it was simply needing a bit of a break from it. I was exhausted. I needed some time to collect my thoughts, regroup and get re-energized. Mission accomplished on that front - I am ready for 2014.

My job this year is to make sure our voices -- the voices of the BlackBerry users, fans, loyalists and shareholders -- are heard clearly and heard loudly.

As we did in 2013, we'll be pushing hard across all fronts to take our Mobile Nations network to yet another level of awesome - you can expect to see me doing a lot of things this year. That said, I'll be making sure to never lose sight of my CrackBerry duties. I've followed this company so long, so closely that it will always be part of who I am. I want it to succeed. I'm more passionate about the company now than I was in 2006 when we were getting ready to launch the CrackBerry site. At the point I just liked the phone and thought it would be cool if there was site to talk about it!

Some of you already noticed my upswing on the blogs this week. Expect to see that continue this year. Lots of editorials from me. And lots of questions and polls too so we can feel where CrackBerry Nation is at on an ongoing basis.

My job this year is to make sure our voices -- the voices of the BlackBerry users, fans, loyalists and shareholders -- are heard clearly and heard loudly. We'll sing praises when they're earned. We won't be shy in voicing our concerns. We'll provide lots of ideas. Some will be great, others... maybe not so much. We'll get them out there though so they all are heard. There will be no sugarcoating in 2014, but we will remain optimistic.

Wherever the future of BlackBerry lies, wherever things continue to go from here, by being part of this community you'll be playing a leading role in the next chapter of the BlackBerry story. And I can't wait to see where this story goes!