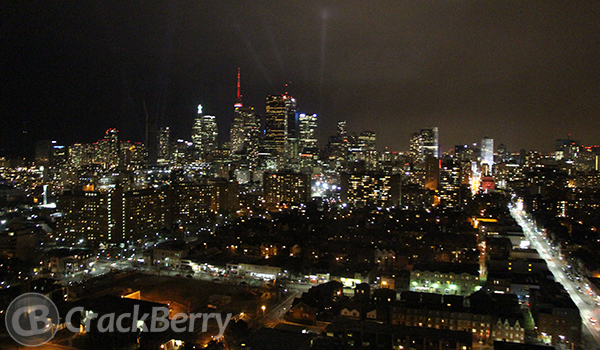 Eight days ago, from the show floor of CES in Las Vegas, I told CrackBerry Nation I was packing up my bags this week for a roadtrip to Toronto to setup our BlackBerry 10 Launch Campaign headquarters.

The roadtrip didn't qo quite as planned. I ended up coming home from Vegas and getting sick for the better part of a week, so we changed things up and I flew into the big smoke today. Huge props to the friendly people at WestJet for not looking at me too crazy when I showed up at the airport with three HEAVY bags to check. I'm here for at least a month - suffice to say I did not pack light for this one.

My (future) brother-in-law Jay Hum is also with me for the month to lend a helping hand (we're going to need a lot of helping hands as we get ready to push through the upcoming CrackBerry redesign). He's a tech enthusiast, surfer, and also eats healthy and works out a lot, which is going to help us keep things on track at our new CrackBerry HQ during February's Mobile Nations Health & Fitness Month.

Bla1ze arrives tomorrow morning at 10:30am. He's here for the long haul too. Adam Zeis arrives in the afternoon at 2:30pm. The three of us will be flying to NYC on the 29th so we're there for the launch event on the 30th. Adam has a young one he's leaving behind to come up to Toronto (remember little Cassidy?), so he'll head home to New Jersey after the 30th while Bla1ze and I head back to CB HQ.

Simon Sage will be arriving Sunday afternoon as well, coming in from Ottawa. He'll be here through early February. And Chris Umiastowski and Zach Gilbert both live not too far away, so they'll be making many appearances as well.

We take possession of our office-for-the-month tomorrow at 4pm. We'll be reporting back regularly from CB HQ, and we'll defiinitely fire up the webcam on a regular basis (probably each evening), so you can hang with the crew here on the blogs via ustream. There are so many people around the world counting down the days until the launch event and until they can run into a store and pick up a BlackBerry 10 phone. We'll put up live chat along with our ustream sessions, which will serve as nice support group for everybody who's waiting anxiously.

We're going to be putting our heads down and be working HARD while we're all together. The CrackBerry redesign is a BIG undertaking. I think you're all going to love it. It's been over two years since CrackBerry has had a visual refresh, and our primary content management system on the editorial side of the site is currently the same as when we built it in 2006. We've gotten a lot of mileage out of it, but it's time for an upgrade. There's a lot of legacy tech and content to deal with, but we're doing just that. I was **hoping** we'd be able to pull the trigger on the site relaunch this week so we'd have all the changes made and kinks smoothed out before the BlackBerry 10 launch event. Our dev team is working around the clock right now, but I don't want to kill them, so it may be early February by the time we pull the trigger. We'll be phasing the rollout in stages as well just to make sure things go smoothly. It's going to be awesome. Our new BlackBerry 10 CrackBerry app is also going to be awesome - and that we'll definitely have in BlackBerry World for launch.

Once the BlackBerry 10 launch and CrackBerry redesign dust settles, we'll definitely be having some fun in Toronto as well. It's clear that CrackBerry has a lot of fans in the city. Since blogging last Friday that we're coming to Toronto, I've been receiving tweets and emails daily from excited readers and BlackBerry fans. We'll definitely be lining up a meetup or two or three (or four or five or six or... you get the picture).

And on that note, I'm going to call this one a wrap. Only 11 more sleeps until the launch event. The final countdown begins tomorrow!