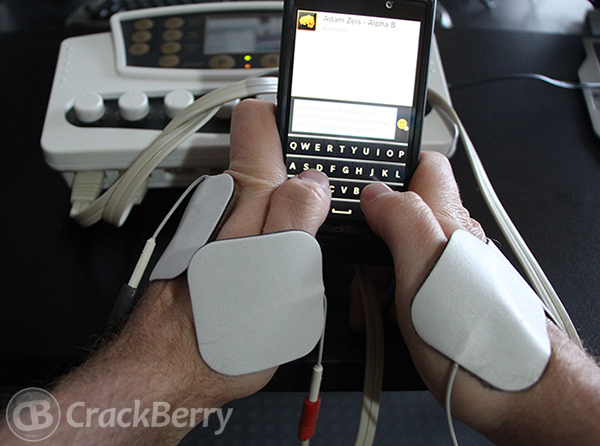 I'll do anything to make sure I win this BB10 keyboard typing contest! ;)

If you read my articles last week, you have no doubt noticed I am having a lot of fun putting my BlackBerry 10 Dev Alpha B device to use. No, it's not final hardware. Nor is it final software. The version of BB10 loaded up on it is a stripped down developer preview. That said, between the flow UI and a few native apps being loaded on it (as well as a bunch of apps I have sideloaded), it's doing a fine job of satisfying my new device cravings.

One of the BB10 native apps that was preloaded is BlackBerry Messenger, which means I've been spending some quality time with the new BB10 touchscreen keyboard. There's no other app that encourages you to learn how to type fast on a smartphone like BBM does. I'm becoming one with the new keyboard, and combined with all of the time I have spent in recent months visiting Android and iOS as part of my World Tour, now have a lot to say about typing on touchscreens. I have a long article in the works, titled CrackBerry Kevin's Theory of Smartphone Keyboards, that will be hitting the blogs soon. It'll be an epic follow up to my Smartphone Hierarchy of Needs theory that has stood the test of time.

As for the photo above... well, let's just say I challenged a few RIM employees to a typing race on the new BB10 keyboard via twitter on Friday. After a little bit of smack talk in all directions, I tweeted the photo above and told them not to underestimate my keyboard training techniques. Nothing like a little electronic muscle stimulation to add another 25% to your typing speed. :)

Having the Dev Alpha up and running has been a great primer for me in terms of getting ready for BlackBerry 10. Yes, we're also using it for app testing per its intent, but I'm also carrying it with me everywhere I go now. In one pocket I have the iPhone 5. In the other pocket, I have the Dev Alpha B, which is using the iPhone 5's data through a WiFi Hotspot. There's no phone app on the Dev Alpha B, but at least I am connected and up and running. It's amazing how quickly you get used to the flow on BB10, and how much better it is compared to the competition. Despite the newness of the iPhone 5, the experience of iOS 6 feels positively old in comparison to the flow of BB10.

The feedback to last week's Brainstorming BB10 posts and videos has been very positive, so I'm going to keep them coming. I know they're torture for those of you who want the phone NAO, but at least they'll also help all of you get primed and ready for the release of BB10 so you can hit the ground running tap the screen with your fingers swiping!