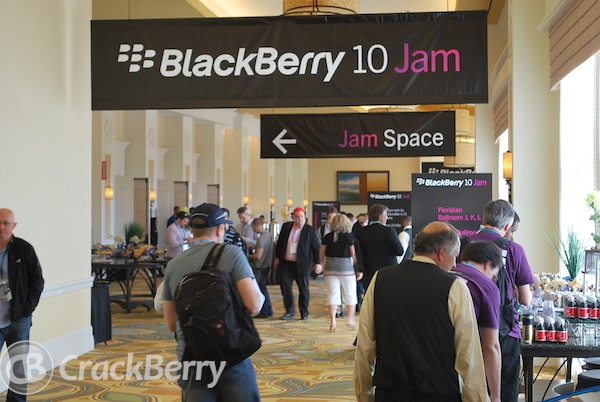 Apologies on being a little late this week on my From the Editor's Desk post (this shiz should have been up Sunday night!), but it's been a crazy few days in the life of CrackBerry Kevin.

Things are mainly back to normal again, so now I'm playing catch up and hustling to get a bunch of things off my plate before Saturday, which is when I fly to San Jose for next week's BlackBerry Jam Americas event.

I am *really* excited for BBJAM 2012. I think the vibe will be a super positive one. As Umi highlighted yesterday, a lot has changed from DevCon 2011 to now. With new management at the top and lots of changes throughout the organization, RIM feels like a new company. And unlike last year, when BBX was presented on stage as a vision of sorts for where BlackBerry was heading, this time around BlackBerry 10 is real.

I'm not sure what RIM will show off next week. BlackBerry 10 is just around the corner, but Q1 2013 is still far enough away that I don't think we'll see any BlackBerry 10 hardware be unveiled at this show. It's still too early for that IMO. That said, I do hope RIM at least gives us a little deeper taste of BlackBerry 10. At BlackBerry World they showed off the flow UI, the touchscreen keyboard and the time shifting / warping camera feature.

There's a lot that we're looking forward to in BlackBerry 10 based on our early preview that I know CrackBerry Addicts would love to see. With BBJam geared at the developers in attendance, if RIM does show off more of BB10 my gut tells me it will be the kinds of things that get developers excited to build awesome apps for BlackBerry 10.

It's not that there has to be a gazillion apps in App World for the launch of BB10. I think people are finally wisening up to the fact it's not just a volume game (there are a lot of crapps in Apple's app store). But there does have to be a solid BlackBerry 10 app for just about everything. There shouldn't be major gaps. If you have a need and search App World, you should find a quality app for it. We know RIM has their hit list of must-have apps they need to get on the platform, and next week we'll hopefully gain some insight into how they are progressing on their mission.

When I talk to non-BlackBerry app developers about building apps for BlackBerry 10, I currently walk away with a feeling that things are in a bit of a chicken / egg scenario right now. A lot of devs tell me they want to see how BlackBerry 10 does before they start building for it or bringing their apps over to the platform. At the same time, there's a realization that if the apps are not there at launch that BlackBerry 10 won't have that opportunity to do well... or at least as well as it could.

BlackBerry Jam Americas is coming up at a great time. BlackBerry 10 isn't so far away from launching that it feels out of reach. It's nearly here. So I hope next week we see RIM build up some more excitement that gives developers who are not yet building for BB10 the incentive to get off their apps and get it done.

Personally, I think the developers that committ to BlackBerry 10 now and have great apps in App World for launch will be glad they did. One thing for sure... we'll be blogging the hell out every great app we use here on CrackBerry, and knowing CrackBerry readers, those apps will be getting downloaded BIG time. :)