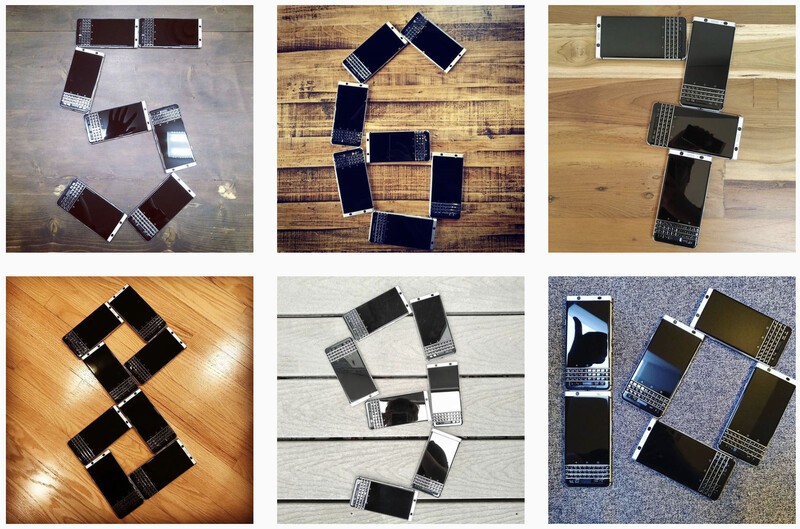 For those of you in North America, we're into the FINAL COUNTDOWN leading up to the May 31st availability of the BlackBerry KEYone. I've been having some fun on Instagram this week drawing the countdown out using KEYones. That number 8 is a work of art, don't you think? And no, those are not all my personal KEYones - they're the demo units I use at for our CrackBerry Meetups!

Unfortunately, I'm not going to be on US or Canadian soil for the BIG day -- I'll actually be in Taipei, Taiwan attending Computex 2017 -- but I thought I'd pop in to the blogs and say hello before I make the long trip and am living in the future. It's been a crazy few weeks for me - I went from two weeks of being sick to two weeks of insanely busy and fun travel as we completed our Canadian CrackBerry KEYone Meetup tour.

I had a few days to play catch up this week, and now as I type this, I'm actually sitting in the Air Canada lounge at the Vancouver airport, an hour away from making the almost 13-hour hop over to Hong Kong where I'll connect for Taipei.

I haven't had a chance to do much CrackBerry blogging since my BlackBerry KEYone Review went live, so I'll make the most of this airport waiting time. I have lots of little updates and quick thoughts to share, so keep reading!

So. Much. Fun. Between our Calgary, Vancouver, Ottawa, Montreal, Kitchener/Waterloo meetups and the Toronto KEYone launch party, I literally met nearly ONE THOUSAND CrackBerry fans over the past two weeks. As much fun as it is to chat with each other online and on social, there's nothing better than meeting and talking in real life. CrackBerry fans are so passionate, so knowledgeable and so nice! Every meetup had a slightly different vibe, but everyone was awesome in its own unique way. The only negatives? I wish I had more time to spend with each person individually and I wish my liver was stronger. :)

As you know, we've been giving away a LOT of IOUs for BlackBerry KEYones this year, both here on the CrackBerry website but also at our various meetup events. Over the next few days Michelle Haag, our Events & Giveaways Coordinator, will be reaching out to all of the IOU winners with a link to a form they can fill out to provide their shipping address. We're working to get all the units acquired and sent out as fast as we possibly can. If you're one of these lucky individuals, congrats again on winning and thanks for the patience!

Save the Date for East Coast US CrackBerry Meetup Tour!

Once I'm back from Taipei, I'll have a little bit of time to recover and then we're going to take the CrackBerry Meetup tour on the road again. We'll be launching proper Meetup Pages soon for each event where you'll be able to RSVP (blog post with full details to come), but in the meantime, I wanted to share our next destinations:

These events should be pretty fun as I'll expect many in attendance to also be rocking KEYones. I'm also planning to visit some cities on the West Coast (LA for sure) - dates will get announced later. And Minneapolis, don't you worry, you will get a meetup this year for sure… I'll maybe plan a road trip for that one.

At these meetups I won't have to give out an IOU for a KEYone - somebody will get to take one home with them at the end of the night!

Where to Buy the KEYone on May 31st?

I know there's still some confusion around this. Am pretty sure we'll see more info on this soon clearing up what retail channels it'll be available in, etc. My big recommendation if you want to make sure you get your KEYone asap is to make sure you're watching for the when the links go live and buy asap. It seems pretty clear from what we've seen in the UK so far that the KEYones are moving quick when they get in stock.

@BBMobile 3/ This makes our nationwide Canadian on-sale on May 31 even more exciting, and also want to confirm some details around U.S. availability

@BBMobile 4/ The KEYone will be in-stock and available to purchase on May 31 here in the U.S., available through different retail channels

Realization - When I used to be really active on CrackBerry, BlackBerry phones didn't really support social apps like Instagram that well, so the audience for our content on those platforms was almost non-existent. Fast forward to 2017, and so much has changed. People are consuming a lot more content on social, and I'm definitely posting way more there. So if you don't see an article from me on CrackBerry, that doesn't mean I'm not doing something somewhere else worth checking out! So be sure to look for @crackberrykevin on Instagram and Twitter and YouTube and subscribe, so you don't miss out (yes, I'm on BBM Channels too!).

If you haven't figured it out yet, I'm a huge fan of Michael Fisher aka MrMobile. In the past year since he launched his new YouTube channel, he's grown leaps and bounds and become one of the top tech reviewers on the scene. His videos are amazing to watch (so much production value) and his opinions are always spot on - he's so unbiased it's almost maddening.

That said, MrMobile LOVES the BlackBerry KEYone, and he's now made it his daily driver, which he hasn't really done in 2017 yet with any phone. For a guy who's constantly swapping phones, to me, this is a BIG deal. It's a huge stamp of approval for the KEYone. Be sure to watch the casual podcast we recorded last night to hear some of Michael's thoughts.

Beyond MrMobile, we're starting to see a bit of a cult following emerge for the KEYone, which I love. Photos like this one from Google I/O last week make me smile!

Lots more to chat on, but I'll wind this down for now.

As you know, I've been very lucky to have been rocking the KEYone for months now, since I helped BlackBerry Mobile unveil it at Mobile World Congress.

I'm really excited that we're now starting to move past the waiting for the KEYone phase and into the I have a KEYone, and I'm loving it phase! It's more fun. And it's a great phone. So I'm excited for you to get your hands on one to call your own sooner, rather than later.