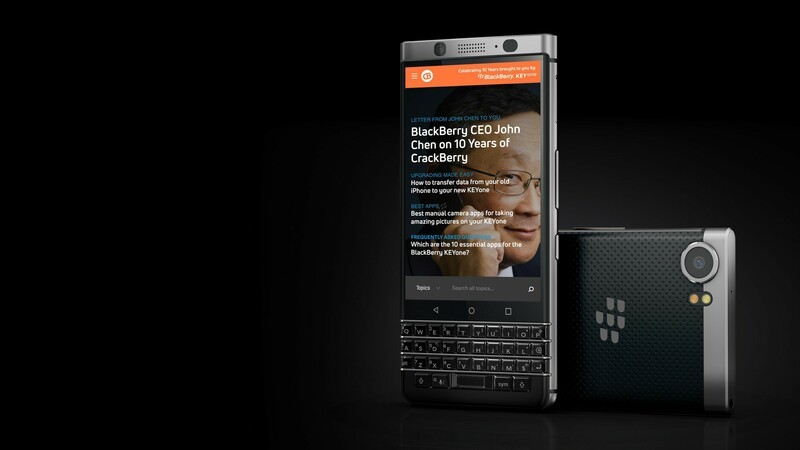 When I initially brought CrackBerry Kevin out of retirement for the month of February to celebrate 10 Years of CrackBerry, I wasn't expecting to have nearly as much fun as I've been having. I also had no expectations that the festivities would continue beyond February and the end of Mobile World Congress.

Following my hosting duties at the BlackBerry KEYone launch event, the fine folks at BlackBerry Mobile let me leave Barcelona with a couple of KEYone engineering samples so I could show them off to other BlackBerry fans itching to get a first look at the KEYone. I did just that in March by hosting a handful of awesome CrackBerry meetups in cities like Toronto, Winnipeg, Miami and New York.

Now here we are, it's April and as we get closer to the rollout of the KEYone I'm happy to say the fun isn't stopping anytime soon.

Listen up for a few announcements that I hope you will all appreciate:

BlackBerry Mobile made the unveiling of the KEYone truly memorable by financially supporting us to bring 10 CrackBerry members to Barcelona to attend the event in person.

I'm happy to say that we've now entered into an advertising partnership with BlackBerry Mobile that will be kicking off soon. This means you can expect to see tasteful, fast-loading ads for the KEYone running on the CrackBerry website. It also means we'll continue to keep turned off all the slow-loading, junky units that I know so many of you dislike but have helped pay the bills to keep this site going.

The BIG benefit of this advertising relationship FOR YOU is that it's going to allow me to take the CrackBerry experience to the next level. I'm loving the KEYone and am all-in on doing what I personally can to get BlackBerry Smartphones back on the map again, so you can expect the proceeds to get invested into making CrackBerry extra awesome. More giveaways, more content and even a revamped site design and app are in the works. It also means I can dedicate more of my time to activities like hosting CrackBerry meetups!

If you're wondering whether anything will change content-wise around here because of CrackBerry receiving advertising dollars, the answer is, not really. You can expect the same CrackBerry Kevin as always, along with the same 'ole Bla1ze. More on us remaining objective below. I'm also looking to grow the editorial team and add some new personalities into the CrackBerry mix. One name you won't see though on CrackBerry anymore is James Nieves, because…

2. James Nieves is leaving CrackBerry and will be supporting BlackBerry Mobile!

James only recently started contributing to CrackBerry, but many of you in the BlackBerry community know him from his years running BerryFlow. James has always been an extremely passionate BlackBerry fan and supporter and is now going to level up by supporting BlackBerry Mobile behind the scenes on their social game.

It's a little bittersweet as James was a fantastic addition to CrackBerry, but overall I think this is just a simply fantastic move for both James and BlackBerry Mobile that will ultimately help benefit all of us BlackBerry users. For James it's his dream gig, for BlackBerry Mobile it's pure win as they gain an individual truly passionate for the brand who understands the needs of their long-term users, and for all of us I think we can agree it's just awesome to see. All the best to James and I know he'll do great things and make us proud.

The last major update we made to the CrackBerry website was rolled out when BlackBerry 10 was getting ready to launch. The KEYone marks a new era for BlackBerry so we're going to mark the occasion with a BIG update to CrackBerry to match. And yes, CrackBerry is finally getting a dark theme. Having seen all of the designs, all I can say is IT LOOKS SOOOO NICE. We also have a big update to our CrackBerry Android app in the works.

I hope you read the words above and felt the same level of excitement as I have right now. When I came out of retirement in February it was with the aim of bringing back the "good 'ole days of BlackBerry" on CrackBerry. Reflecting on the past two months and thinking ahead on what we have planned, I had the realization it's time to quit trying to re-live the past and instead focus on creating a new era of BlackBerry awesome. Per the announcements above, I truly believe we can rebuild this community and make it better than ever.

On Disclaimers and Remaining Objective - Over our 10 Years of CrackBerry we have had many advertising sponsorships, including occasional campaigns with BlackBerry. Per disclosure rules, any content that is specifically sponsored always gets labeled as such. Since this new BlackBerry Mobile sponsorship is a broad advertising sponsorship, we'll be baking in a note at the at the top of the site (i.e. 10 Years of CrackBerry brought to you by BlackBerry Mobile) and we've updated our site footer as well with the following verbiage:

You could call us biased, and you wouldn't be wrong, because at CrackBerry we love BlackBerry and think you should own a BlackBerry Smartphone! We also work as a community support and marketing partner with BlackBerry and BlackBerry Mobile. Our immense passion and knowledge of BlackBerry by our editors and community members make this the best resource for BlackBerry you'll find anywhere!

As part of this disclosure, for personalities like CrackBerry Kevin and Bla1ze on Twitter or Instagram, you may occasionally see us add additional disclosures like #sponsored or #ad on posts related to BlackBerry Mobile product sales. Our social content is always our own, but we just want to be frank and make it obvious with our readers that we're effectively paid supporters of BlackBerry Mobile due to their advertising on CrackBerry.

As for our ability to remain objective during periods of sponsorship, I'll copy and paste in part of a reply I left in the CrackBerry forums the other week on this topic:

When I launched CrackBerry, it was biased by definition and by design. I mean, the site is dedicated to BlackBerry. We're a pro-BlackBerry type of site, even when we haven't always been happy or agreed with everything the company has done over the years (I like to think of us as the coach on the sidelines cheering on their team to win even when yelling at the players). CrackBerry definitely is not and has never claimed to be a journalist-run organization. This is a community by BlackBerry users and fans, for BlackBerry users and fans, that aims to set out to help all BlackBerry users... and we've always felt the world would be a better place if everybody used a BlackBerry so we always put a lot of effort and have a lot of fun covering the newest devices. I think we're always pretty damn objective though as we're more passionate and knowledgeable about this stuff than anybody else out there writing or talking about it.

CrackBerry runs independent of BlackBerry, but over the years there have been times when we work more closely together, whether on marketing initiatives or advertising campaigns or support initiatives. If a content piece or initiative is specifically sponsored, we disclose that. Back in 2013 for example we ran the big BlackBerry-sponsored Talk Mobile campaigns, and at times you'll see advertising running on the site for BlackBerry. We've always had a good working relationship over the years.

If you have any questions based on all that, I'll linger around the comments for a bit so I can answer them.

It's been an exciting start to 2017 and the best is yet to come. I hope you join us for the ride and spread the word that it's time to buy BlackBerry Smartphone again!