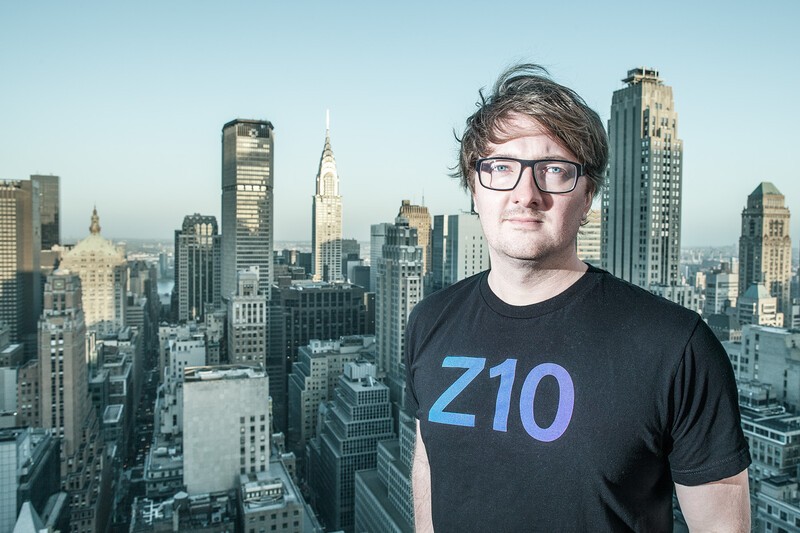 As quickly as our adventure in NYC began it has come to an end, at least for a little while. The last few days were a whirlwind as we stripped down our temporary HQ and I packed up my things in a hurry to head to BlackBerry Live.

I'm actually typing this From the Editor's Desk post from one of our hotel rooms at the Marriott World Center hotel in Orlando. I flew in with Adam Zeis earlier this afternoon and Bla1ze touched down around the same time, so we all cabbed it over to the hotel together (that's *never* happened before in all the years we've covered this show). Things are still quiet here on the Sunday night before this event. We're enjoying the peace while we can... soon enough the rest of the CrackBerry team will arrive as will all of the attendees to the event, and then the craziness will begin. Before we start looking ahead to BlackBerry Live though, I want to take the rest of this post to cap off our time in NYC and highlight some of my favorite moments.

I arrived in NYC nearly at the same time as BlackBerry's CEO Thorsten Heins did so he could talk to the media on the eve of the BlackBerry Z10's US launch. Being in NYC showed its advantages immediately - we were able to walk over to the Mandarin Oriental Hotel and interview Thorsten Heins in person in his hotel suite. It was a great interview showing off just how personable the new BlackBerry chief is. And he even answered the famous Z10 or Q10? question. If we get a chance to talk to Thorsten at BlackBerry Live, we'll ask him the same question again and see if he's still championing the Z10. I know I'm still having trouble deciding between the Z10 and Q10 for myself.

As the Z10 rolled out on AT&T, T-Mobile and Verizon, CrackBerry was there to witness it in person. After the long wait for BlackBerry 10 to hit US soil, it was great to see so many BlackBerry fans happy they could finally pick up a Z10. I enjoyed all of our store visits, and especially the first one when we hit up the Best Buy at Union Square at midnight to witness the first "official" sale of the Z10 to Manny. See the video above for all the fun.

I don't like to use the word epic in blog posts... or in real life for that matter, but it's the only word in my vocabulary at the moment that seems fitting to describe our CrackBerry NYC Meetup. When we posted about the party we hit our RSVP cap in just a couple of hours, and everybody showed up and then some. BlackBerry fans are the best! Good times were had by all. Seriously, it makes me wish we could take CrackBerry Meetups around the world - it was such an awesome time.

The BlackBerry Q10 isn't out in the USA yet, but it was in NYC that we picked up our AT&T BlackBerry Q10 unit for our Review. Overall, I'm really loving the BlackBerry Q10. I love the Z10 too of course, but the Q10 just has that classic BlackBerry look and feel that I love so much.

I just want the BlackBerry Q10 to become available in the USA already. During my time in NYC I spoke to a LOT of BlackBerry owners. I still see a ton of older BlackBerry phones on the street, and I'm not shy - I will begin talking to strangers at random about their phones. It's pretty clear to me that the vast majority of BlackBerry users -- at least the ones I've talked to -- are waiting for the Q10 vs. picking up the Z10. They want their physical keyboard. Period. Hopefully this week at BlackBerry Live we'll get concrete word on when the Q10 will become available in the US. In my opinion, it can't be soon enough.

I was hoping the Q10 would become available in the US while I was still in NYC, but that wasn't the case. It's all good though - after BlackBerry Live I'll be heading home to Canada for the summer and we'll keep the pedal to the metal on our Q10 and Z10 coverage.

We've teased #TM13 a bit these past few weeks but so far haven't really said what it's all about, other than to imagine our good 'ol Smartphone Round Robins of the past, but bigger and better. Well, more like MUCH BIGGER. MUCH BETTER. Soon, you'll all know what #TM13 stands for (one or two of you may even have guessed it already, but we're not going to acknowledge your correct guesses until the time is right).

As it pertains to my time in NYC though, let's just say a good chunk of it went to #TM13. Planning an event like this takes a lot of prep work work - there are no shortcuts - so we've been putting long hours into this one. I've enjoyed every minute spent working like crazy on #TM13 so far, and I think you'll really enjoy it as it starts to unfold across our sites. Be sure to hit up the link below to signup for #TM13 updates. They'll be coming your way soon.

As I said when I packed my bags for New York... the name CrackBerry was born in NYC and it just feels right that CrackBerry have a presence there in one way, shape or form. I'll be back to NYC in early June for a few days for some #TM13 fun, and after that? Well, you'll just have to keep reading CrackBerry to see where we go from here. If the first half of 2013 is indication though, we'll be going somewhere. We don't stop believing. And in true BlackBerry 10 fashion, we Keep Moving!

Ciao NYC. I Heart You.