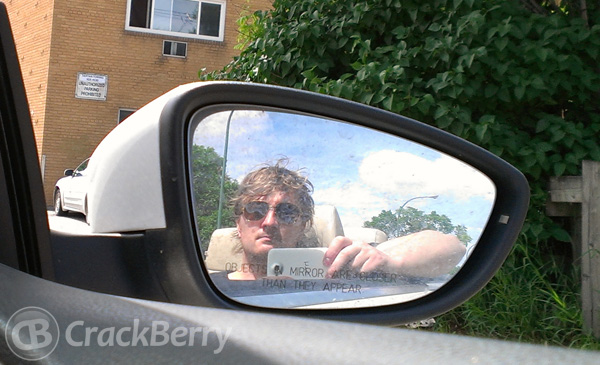 Yes, I'm using an Android phone for the month of June as part of the Mobile Nations World Tour, so
don't act all surprised if you see me tweet from an Android client.

Happy Father's Day to all the CrackBerry dads out there!! I have to give a special shout out to my pops who I didn't get a chance to see today (I ran in a half marathon and couldn't make the trip out of the city). He reads CrackBerry daily though, so I know he'll see this. Thanks for being the bestest dad ever!

To all the fathers, I hope you've enjoyed your special day of honor and that your kids showed you some extra love. And if you received socks and ties today but next year are hoping for a little something something that caters to the techie in you, be sure to leave your web browser open to this page for your kids to stumble upon or accidentally forward them an email with the link. Father's Day Tech Gift guides only work when they're read by the kids ;)

Looking back at the week that was, it's been a busy one, so let's get to it!

Monday was Apple day and the tech world stopped to take in the Moscone Center keynote. And while I haven't read through every single reaction to the event out there, the concensus was that people we're hoping and expecting more. On the iOS front, the changes coming in iOS 6 are incremental (check out iMore's big list of iOS changes). Bla1ze really summed it up well on his debrief editorial which relates iOS 6 to what we are waiting for in BlackBerry 10:

RIM is going for something new, something different, whereas Apple, realistically, just brought more of the same to the table. RIM is looking to pull in bezel gestures, swiping to your inbox, a whole new keyboard experience and more. Remember, excluding the BBOS, iOS is now the oldest mobile platform on the market. This kind of iOS 6 announcement smells more of maturity -- aka old age -- than it does innovation. Oddly enough, if you watch the new MacBook Pro video there is a quote within it that kind of sums up what the iOS experience is becoming:

"When you build on top of something else you're stuck with inccremental changes. When you start with something new you can totally redesign it."

Apple has been adding incremental changes to their aging iOS for a while now. Yes, RIM had an aging OS, which arguably forced them into making something new, but that's just it -- it's going to be all new and fresh.

As much as I am a BlackBerry champion and love to preach the BlackBerry gospel, I do have a lot of friends, family and colleagues that are iPhone users and one thing I hear more and more from them is that they are getting "bored" with their iPhones. The iPhone is an easy phone to pick up and use, but the downfall of that simplicity is that the user experience gets old. Open. Close. Open. Close. I really am looking forward to the "flow" experience of BlackBerry 10, and think if RIM executes well will be carving out a unique and sizeable niche in the mobile market.

As for what did excite us at Apple's event? Well, it seems everybody on the Mobile Nations team wants a new Macbook Pro with Retina display. I was really hoping for a new Mac Pro to get announced (the desktop), but it seems the major update to that will come next year.

A Better Look at BlackBerry 10

BlackBerry Jam developer events are making their way around the world, and CrackBerry's DJ Reyes and James Richardson both took in the event in London this week. DJ brought us a close and personal look at the Jam event, while James brought us some BlackBerry 10 eye candy to check out along with his first impressions of actually playing with an early build of BlackBerry 10 running on the BlackBerry Dev Alpha device. And yesterday I posted a screen capture from what is reported to be the BlackBerry 10 Contacts app.

RIM already gave us a good preview of BlackBerry 10 at BlackBerry World last month, and while we're not seeing anything crazy in these new photos and caps, every new image and photo we see just makes us want it more. I love reading the comments to these posts on CrackBerry, as you can see the excitement for RIM's new OS. Heck, even reading through the comments on other non-BlackBerry sites that are reposting the photos, I'm seeing more and more comments from the peanut gallery from people that are becoming pro-RIM. These are not people who are BlackBerry fans (yet), but people who I think want to truly see what RIM can deliver. Things are still going to get worse before they get better for RIM (I'm already dreading the bloodbath following RIM's next earnings report), but the growing anticipation for BlackBerry 10 is promising. It's just the waiting that's hard.

I've already widely broadcast that I'm using an Android phone this month. The HTC One X specifically. I'm learning that sometimes you need to repeat the message though as I everytime I send a tweet from it I get met with 30 @replies claiming the world is ending as I've switched. Kind of aggrevating. Kind of annoying. But it's all good. I'll just keep repeating the message (which I'm doing right now). I've chimed in with a couple of posts on Android Central relating to my experiences, and as I mentioned the other week, I'm picking up Android pretty well. Heck, I even gave the Android Central community a BlackBerry tip - check out the video above.

As for the HTC One X, I really hope RIM can pull off a display for their first BlackBerry 10 phone that is as good. As far as mobile devices go, it's the best display I've seen to date and is really the killer feature of that device. What amazes me though is how bad HTC has gotten the "basics" on the device. Things that have been a given on BlackBerry for years are literally garbage on this phone. The speakerphone call quality is crap (I use speakerphone a lot). I've found the bluetooth connectivity to be completely unreliable with my car. It always "connects" when I get in, but whether or not it actually works is a 50/50. It aggrevates me daily. And I've found the radio network connectivity to be completely suspect as well. I've had to restart the phone on numerous occassions now as the data just quits working. And I'm found it dropping down to Edge for no apparent reason. I've also found that the signal strength just isn't that good. Miss CrackBerry keeps using her BlackBerry in bars/restaurants we go to while the One X signal drops to nothing (we're both on Rogers). So it has a beautiful display, but for me it really fails on a lot of the basics, which I almost find hard to believe. The HTC One X has received a lot of glowing reviews - it makes me think I need to start reviewing all phones as I really put them through their paces when I review them. I get out of the office/house and really see how it performs in the real world, and as a bit of a creature of habit, I have a great baseline of tests bullt into my life upon which to do these comparisons. Maybe I'll pick up an SIII when it hits Rogers to see how it stacks up to the One X.

Next week I'll be kicking my Android learning into high gear - I'm going to hit San Francisco which is where Google I/O is taking place. The Android Central team will be their covering all the news, so I'm going to take advantage of the time to further immerse myself into this Android world. After that, I'll come home and wind down my month of Android use - expect some indepth content on it from me then.

And despite being on Android, I'm still bring back lots of BlackBerry news right now. If you missed my tip this weekend on enabling user-controlled snooze times on BBOS reminders, CHECK IT OUT NOW and SPREAD THE WORD. It's a life changer.

Until Next Week... Keep your thumbs on your keyboard!

Hmm.. I need to work on some good sign off lines for this weekly editorial... if you have any good ideas, let me know in the comments!.