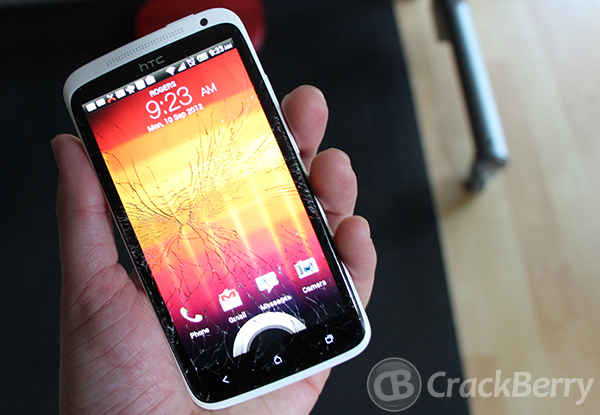 The BlackBerry Gods intervened this morning and have pretty much put an end to my visit with Android as part of the Mobile Nations World Tour (for the details of what happened, see this post). Long story short, I went for a jog this morning -- without the phone -- returned home, picked it up with sweaty / shaky hands and proceeded to drop it on the floor. I guess the Gorilla glass wasn't Gorilla enough for this fall. Lesson learned, yet again... if you want to protect your investment, use a case.

While a broken phone sucks, the timing on this isn't too bad at least. I'm going to switch back to my trusty white BlackBerry Bold 9900 for the next few weeks - I want to be representing properly at BlackBerry Jam Americas at at the end of the month. Then from there I'm going to give the iPhone 5 a try, then later in the fall with try out Windows Phone 8 on the Lumia 920. Then it will be on to glorious BlackBerry 10, which we're excited as all heck for! As for my final thoughts as a BlackBerry user gone Android for a stint, I'm going to work on my wrap up post this week, so stay tuned for that.

There's a ton of other stuff going on right now in the world of mobile, so keep reading for some quick thoughts on everything...

As I mentioned in last week's From the Editor's Desk, I had to serve Mobile Nations double duty and helped out the Android Central crew cover the Amazon event in Santa Monica. From my standpoint it was worth the trip, as it gave me a chance to test out and get some practice with our new live blog platform. We rocked it hard - if you missed it you can check out the replay here. We were speedy and had wicked photos. CrackBerry readers will get to experience it on September 25th when we put it in action for the BlackBerry Jam keynote in San Jose.

As for the new 7" and 8.9" Kindle Fire HD hardware, you can check out the video debrief above for an overview and some thoughts. Both tablets are hitting the market with solid specs, competitive pricing and a big ecosystem for content. I'm sure they'll do well, especially in that US market that Amazon as a company services so well. Personally, I still find the experience of these Amazon tablets to be focused purely on consumption. I find the user interface to be really tedious and inconsistent and slow to use when it comes to navigating around the device and jumping between different app experiences (go to 9m15s in the video above where I show how inconsistent it is). I own a PlayBook, iPad 3, Nexus 7 and Touchpad, and between them all I prefer the gesture-based UI of the PlayBook the best. The multitasking power and ability to jump between everything and anything trumps the rest.

That said, Amazon did introduce a couple of smart features. The implemention of Kindle FreeTime is a pretty smart for those who have kids in the house using tablets and want to limit their usage. Another feature I thought was impressive was the rollout of Amazon's WhisperSync for audio books. Essentially you could be driving in your car, listening to an audio book, then switch back to reading the book when you're home and it'll know where you left off listening so you can start reading again from that point (and vice versa). Clever. Audible has rolled this out to their app for Android already, so hopefully we'll see Kindle / Audible apps on BlackBerry 10 embrace this too.

Get Ready... iPhone 5 Event This Week

When Apple takes to the stage to unveil a new product, the whole tech world stops to listen. That will happen again this Wednesday when Apple announces the iPhone 5. Over the years Apple has been pretty good at keeping a lid on their secrets, but when it comes to the iPhone 5 it feels like everything is already known (kudos to iMore for being behind a lot of that info).

Looking at this iPhone 5 Preview Roundup actually gets me more excited for BlackBerry 10. Apple is building a better iPhone (bigger screen), and it doesn't appear that they'll be releasing anything that disrupts the unique strengths and positioning that BlackBerry 10 is going after. In other words, I think the Top 10 Reasons We're Excited for BlackBerry 10 will hold just as strongly even with an iPhone 5 on the market. That's a good thing. It makes me wish BlackBerry 10 were available now vs. next year though. I think for a lot of people the iPhone 5 may prove to be underwhelming - if BB10 were here now we may see more people try out BB10 vs. go for the iPhone 5.

All will be known about the iPhone 5 soon enough though. We'll weigh in on it properly once the dust settles.

Behind the scenes, a ton of work is happening on our Mobile Nations sites. When it comes to CrackBerry, we'll have a proper redesign coming in time for the roll out of BlackBerry 10. In the meantime, the CrackBerry Forums are going to get a pretty decent upgrade this week. We'll be upgrading our forum software to the latest version, and with that will come some solid changes to the full web experience. I'm super excited for this. :)

Getting Ready for BlackBerry Jam Americas...

If you're a BlackBerry developer and have not signedup for the event yet, do it now! At the event this year from CrackBerry will be Adam, Bla1ze and myself. We'll have some more posts dedicated to this hitting the site soon, but seriously... if you're on the fence about attending, just decide to go. You'll be glad you did.

Don't drop your phone! And if you don't have case for it, buy one!