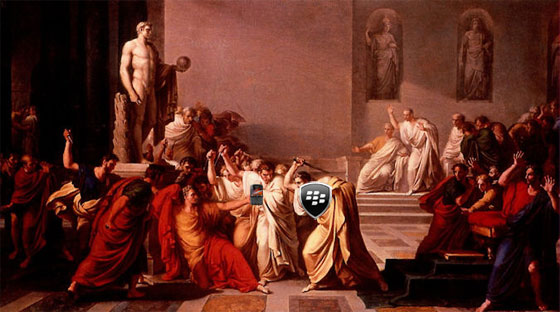 I have been betrayed! The BlackBerry Protect application that I have lauded and recommended time and time again has - in my eyes - failed me. But let me back up a little (and turn the melodrama dial down from eleven).

The other day, I finally joined the OS7 masses, getting a brand new BlackBerry Torch 9860 (I really liked the CDMA version of the phone). I know, I know, I'm a little late to the game; but in my defense, so was my carrier. Anyway, whenever I do something on my BlackBerry I try to figure out how to turn it into an article. This article was going to be titled, "How lazy do you want to be? Switching devices using BlackBerry Protect." Sadly, this is not that article.

Now obviously, I wasn't expecting miracles. The BlackBerry Protect application only grabs a small portion of the data on your BlackBerry: contacts, calendars, SMS text messages, memos, and browser bookmarks. But between that service and the nearly ubiquitous BlackBerry ID, I figured it would be an easy transition to a new phone - no BlackBerry Desktop Software required. I was wrong.

Trouble from the Start

Of all the data that BlackBerry Protect backs up wirelessly, I really only cared about my contacts. After going though the rigmarole of setting up BlackBerry Protect (which, by the way won't let you restore data until after you've agreed to the TOS/EULA - a fact that is not even remotely implied by the setup instructions), I expected to find all of my contacts waiting for me. Instead of finding over 100 contacts on my new phone, there were three. Since these were the three most recent contacts, I imagine this was some failing of an incremental backup that only saved recent changes. Whatever the exact problem, the result is still the same: Fail.

Setting aside the problems of missing contacts for a while, I next turned my attention to getting email working on my new phone. I've had a BlackBerry ID for a while, and many Research In Motion-designed applications use it - BlackBerry App World and BlackBerry News (Feeds) to name two. I was really hoping my ID would tie my old and new phones together so I wouldn't have to jump through hoops to get email working. Nope.

Every email address associated with your BlackBerry must have its password entered and verified. (I'll save my troubles with that particular system for another time.) In Research In Motion's defense, I believe this is a security measure to prevent unauthorized email access, but it's still an annoying step to have to take. As of this writing, I don't have access to three accounts because I can't remember their passwords. On the plus side, at least one of my email addresses had some synced data attached to it, and I got most of my contacts back (sorry Adam, my new BlackBerry doesn't like you.)

On to BlackBerry Messenger. Oh, no, Joseph, not BBM troubles, too? Yup. BBM has this nice feature that allows you to back up contacts using one of your BlackBerry-associated email address. Trouble is, it didn't work for me. I know for a fact that I've used that backup feature before installing BlackBerry Beta Zone stuff. Sadly, when I tried to recover those contacts, none could be restored. Thankfully, I figured out a way to import the contacts using a saved local file and a couple of USB cables.

The Lesson of Today's Story

When I set out to switch BlackBerry Smartphones, I knew I wouldn't get everything. Received emails would be lost, apps wouldn't transfer, and BlackBerry Messenger might be a little wonky for a little while. I didn't know it would turn into a multi-hour ordeal of frustration and swearing. Rather than writing the article I wanted - about how easy it is to switch devices - I'm writing one about how difficult that process is. The moral of this unfortunate saga is two-fold.

First, to Research In Motion, what happened? Why didn't Protect transfer my contacts? What happened to my BBM contacts? Why is it so difficult to restart email services on my Smartphone? If my name were Joe Everyperson - and not Joseph Holder, CrackBerry blogger extraordinaire - the first thing I might have done is turn around and take this phone back to the store.

When selling Smartphones to the consumer, that end-user ease of use is one of - if not the - most important factors. I really thought that RIM was making great strides in this with their BlackBerry ID, but that has not been the case. I yearn for the day when my new phone asks for my BlackBerry ID and then hourglasses for a few minutes as all my old data is pulled onto the new phone. There is certainly a security issue with that scenario - and there's always a balance that must be struck between security and convenience - but Research In Motion knows security. If anyone can figure it out, they can.

I understand why things work better in the factory than in the wider world, though. As people who design and build these phones day in and day out, the average user's experience just doesn't come into play. It's pretty much a given that programmer and users do not think alike. That's why beta testing these phones and services in real-world situations is so very important - something that the BlackBerry Beta Zone has done a fantastic job at. In fact, if RIM wants to send me a new phone every month to Beta test, I'll be more than happy to do my best to break it. After all, that is what a good beta tester does.

Finally, my readers, a bit of advice for you. In the past, I've been quite happy to share my foibles with you. If I managed to cause some horrid foul-up with my Smartphone, at least you don't have to suffer with the same problems. Today is no exception.

Use BlackBerry Desktop Software to switch between your phones. Had I simply gone the "lazy" route and hooked my phones up to my computer, none of this would have happened. The Device Switch Wizard in BBDS would have prevented all of these problems. After less than half an hour, my new phone would have had all of my contacts, all of my email address, all of my BBM contacts updated with my new PIN, all of my previous emails, and even the majority of the apps that were installed on my BlackBerry Torch 9800. In short, BlackBerry Desktop Software is the easiest, simplest, best way to switch between BlackBerry Smartphones; use it.

Now, if you'll excuse me I still have some apps to install. And some Facebook friends to connect to my BlackBerry contacts. Ditto for BBM contacts. And some email account passwords to look up. And some Wi-Fi networks...