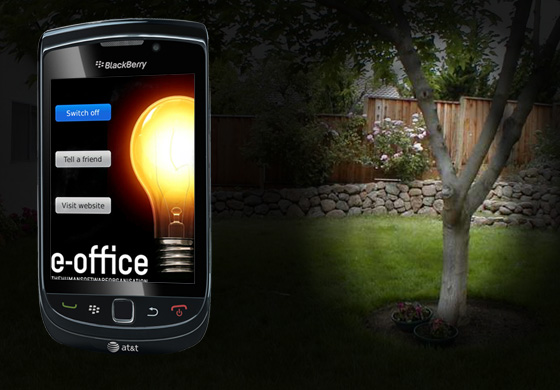 To be fair to those other apps, they work too. They just work differently. In every single flashlight app I've downloaded, they just start the video camera. First though, the video light must be set to turn on when the video camera starts. You see, many of these apps are a mere shortcut to the video camera.

e-office flashlight is different (thank goodness). This flashlight app still uses the bright LED in front; but without starting the video camera. The light turns on much more quickly, and Torch owners can finally rejoice: the light doesn't go out when you tilt your hand slightly. If you've ever been searching for the remote under the couch with the video light, you'll know what I mean. The light turns off every time the screen orientation changes.

e-office flashlight is the flashlight app I've been searching for. The light turns on quickly, doesn't use the video camera (just the light), and doesn't need to be a Trusted Application or require a load of permissions to run. It does need the Files permissions (otherwise you get the "Unable to create player" error), but that's one I can feel safe in allowing. Why is this important? Some app developers are less scrupulous than others. No worries about that here.

Ah, and did I mention it was free?