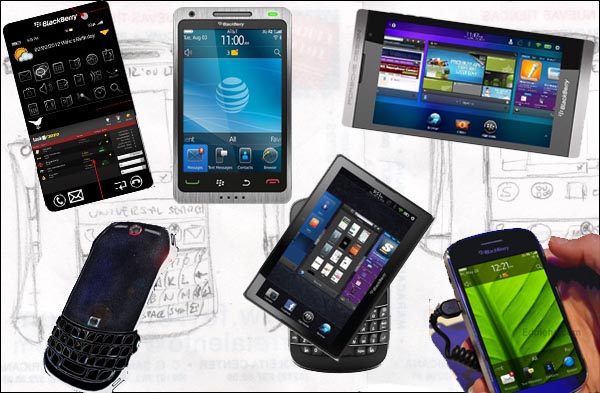 Next up in our series of DreamBerry articles, we have TEN more concept BlackBerry designs to check out, drool over, pick apart and brainstorm around. We've already seen some major creativity displayed and enthusiastic community response shown to the Anastasiadis BlackBerry and PlayBook 3.0 concepts we posted, and the ingenuity continues.

Take a gander below to discover some future Berry concepts that are both dreamy, cool and crazy. We've got spinning sliders, dual trackpad and dual display delights and more below, with the images accompanied by their creators descriptions. Gotta love CrackBerry.. talk about passionate and engaged members! Love it!!

My name is Matt, and I present to you the BlackBerry Bold-X.

I've been throwing ideas around for the last few days trying to think of a functional form for a BB10 Bold. The main issue seems to be that, if we take the PlayBook as our reference, for BB10 the display should sit in landscape. Without using a slider its awfully difficult to fit the renowned Bold style keyboard onto a phone. Eventually I arrived at the idea of splitting the the keyboard to the sides of the screen.

My design maintains the Menu and Return keys, while deferring the Answer and End Call keys to the touch interface. There is a front facing camera and an LED indicator to either side of the BB Logo. I have included two optical track pads so that this next generation powerhouse will not only be a powerful work tool, but will also be exceptional for gaming. It would be possible to port PlayStation certified Android apps onto a bold with two optical track pads (dual convenience keys on top may function as shoulder buttons). As the center piece, a beautiful 3.8"-4.0" 720p screen (gorilla glass 2 makes for a durable display). There is also a large speaker located below the screen for an exceptional multimedia experience. Playbook swipe gestures will function as normal, with the exception of the lower sides where the keyboards reside.

Since I love my Bold 9900 so much I chose to heavily borrow its design cues. A 16 mp camera resides in the back of the phone, complete with dual LED flash. Similar to the 9900, there is a faux carbon fiber (glass composite?) weave backing. Buttons and trim are all stainless steal. The thinness of the Bold 9900 is maintained in this design, but the overall larger footprint will allow for a larger battery to keep you going strong all day.

Throw in a quadcore processor and we're looking at the best phone on the market by a mile.

My name is Henrik Bakke-Hareide, and this is what my DreamBerry would look like! It's called the BlackBerry Xifos, which is Greek for sword.

And most important, a slick clock on the lockscreen, that looks like it's worth at least $500!

I am CrackBerry member bcs925 and this is my DreamBerry. It's kind of a spin on the slider phone (pun intended).  Using the same keyboard as the 9900, overall dimensions of the 9900, and aspect ratio the PB it will be ~4in. screen and obviously running BB10.  I think this could be the new iconic look because I've never seen a phone that looks like this, but of course if you want to blend in then don't have it "flipped open". It's like a slider, with the best of both worlds.  I also chose this because I like the width of the 9900 while typing, where as I think sideways sliders (Moto Droid 3) are awkward to type on the physical keyboard.  Hope you like it!

BlackBerry B-Bold by Stephen Dodsworth. Its design inspiration comes from the Bold 9900, the P'9981, London, and the PlayBook. I tried to show the K.I.T.T. Knight Rider Notification light in the pic, but It didn't work out as well as I had hoped.
Operating System

From CrackBerry User & Abuser WILLSaDICKted. This DreamBerry design features front and rear HD cameras and a slide-out QWERTY keyboard with a trackpad.

CrackBerry member xRuhRohx's design ideas for a future BlackBerry. One is an all touch device that takes a lot of design queues from the PlayBook. The other is identical, but with a landscape slide out keyboard. The keyboard I used for the slide is just a stretched Bold keyboard. I was very unsure as to what I would like to see in a keyboard with that much space. Both would be sporting a 5.0 inch screen with 1920 x 1080p resolution and front and rear facing cameras. This is where I would like to see a future BlackBerry design head to. Simple, clean, and elegant.

Rob Virtu's Dream BlackBerry. Featuring a full QWERTY keyboard in a candy bar style design, pure touchscreen, approximately the size of the BlackBerry Bold 9000. The back would have an 8 megapixel camera with flash and a soft no-slide back panel. The front BlackBerry logo would also serve as the notification LED, and a front facing camera would take the place of the trackpad, though recessed to prevent fingerprints and scratches.

From Elaine L. Above is what I think the DreamBerry should look like for BB10 as well as another dream description of mine.


My 2nd Dream: To one day have a Full Voice Command Device where every single thing is voice activated with a touch of a button. No more having to press the BB Menu, or having to swipe the screen to look for an App. You just simply activate Voice Command. This gives the user the advantage to have a total hands free device without messing with any of the buttons while driving.

CrackBerry member Pootermobile. Here is my submission for the "Dreamberry." This was a mockup I had made a while back and have been tweaking it once in a while. This is the FS-1 (FS stands for "flagship" and I thought it sounded cool) which is a device with a trackpad and normal four BlackBerry buttons. It also has a Knight Rider-ish notification LED too!

DreamBerry design by Suhail. Attached is what I would love to see BB to make. Front camera, LED light used on 9000/9700, QNX, massive all touch screen, with a clean sleek look. Thanks!

Have a DreamBerry concept you'd like to submit?
Email it to [email protected] Subject: DreamBerry