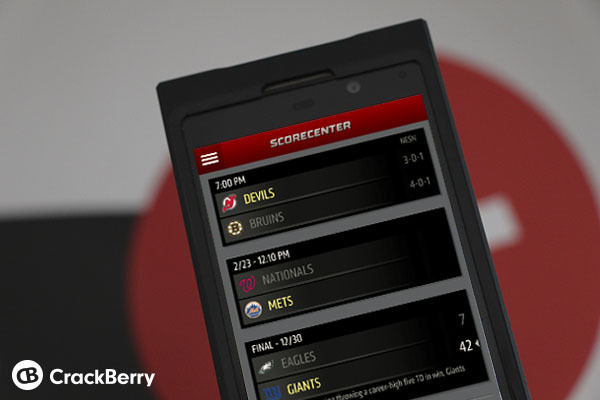 I know there are a lot of you out there waiting for this one, and today ESPN has announced they have officially launched ScoreCenter for BlackBerry 10.

ESPN ScoreCenter brings you scores, news and video from sports leagues and teams around the world. The new app makes it easier than ever to follow your favorite teams, stay up to date on the latest scores with personalized scoreboards, follow the nation’s top stories with in-depth coverage and analysis, and more! You can read the full press release below and grab ESPN ScoreCenter for free in BlackBerry World at the link below, for your BlackBerry 10 device.

“Part of our mission at ESPN is to be wherever sports fans consume content, and that includes a broad audience of BlackBerry customers,” said Michael Bayle, Senior Vice President & General Manager, ESPN Mobile. “The new BlackBerry 10 mobile computing platform translates well for those that want a personalized experience, which is also in line with our goal to deliver content that fans care most about quickly and as easily as possible across platforms.”

“Sharing and connecting is at the heart of BlackBerry 10. The BlackBerry 10 platform will allow ESPN ScoreCenter fans to quickly share the most exhilarating moments with their social communities, close contacts and colleagues,” said Martyn Mallick, Vice President, Global Alliances and Business Development at Research In Motion. “Sports fans using the new BlackBerry 10 smartphones will be able to catch up with latest info on their favorite teams and players with the ScoreCenter app.”

The HTML5-based application for the new BlackBerry 10 smartphones – based on the ScoreCenter.com web app – is now available on the BlackBerry® World™ storefront, and gives fans access to breaking scores, stats, standings and news from hundreds of sports leagues, teams and players around the world. Personalization options allow fans to customize the app to their favorite leagues and teams.  Additionally, it features the latest and most contextually relevant video clips and highlights, while also delivering the top events and biggest news headlines of the day.