Ah...good old DOOM! Do you remember DOOM? If you are at all into video games and were around in or before the 90's, then you probably know DOOM, and if not, quite frankly you should! DOOM is a classic, legendary video game that defined the genre of the first-person shooter. The game was created by id Software, a company with a huge legacy best known for their classics such as Wolfenstein 3D (the first 3D shooter game ever to exist) and their Quake series. Still around today, the company has been hard at work on the fourth installment of DOOM, a continuation of the modern, popular horror/survival shooter, DOOM 3.

As awesome as the modern DOOM games are, sometimes nothing quite compares to the classics. For this reason, many people still play the retro DOOM games today. They most often make use of source ports which improve some elements of the game while ultimately, ideally maintaining the original feel and experience. Some of these source ports have made it over to the mobile realm of gaming, and lucky for us, one of the ports is available for BlackBerry 10 thanks to developer Michael Ryssen.

The game, available for only $1.99 in BlackBerry App World, is called DoomGLES. If you want to jump right into the classic, action-packed, demon and zombie-slaying fun, you can install it, run it, and play the shareware version of the original DOOM right away. However, it is important to understand that you are buying the port from this developer, rather than buying the actual DOOM games. For this reason, to install full DOOM games onto your BlackBerry device, you must be willing to do a little bit of legwork and own (preferably legitimate) copies of the game WAD files. I have made a simple, easy-to-follow video showing you exactly how to get all of the full DOOM games up and running on your BlackBerry.

What You Will Need 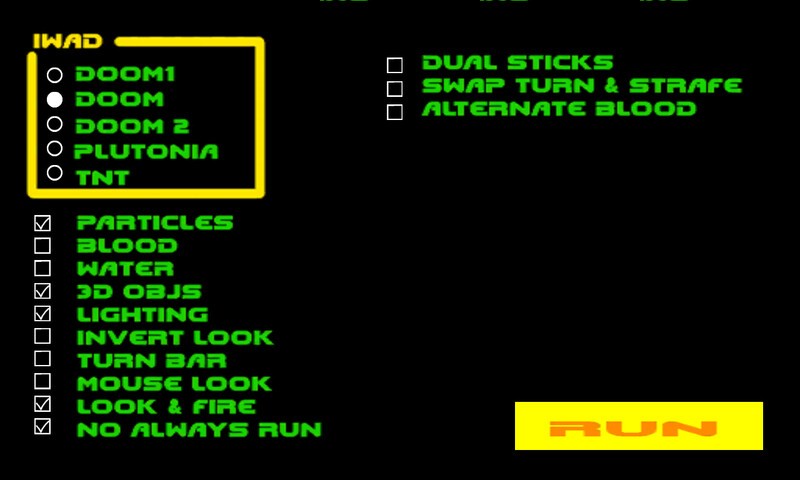 When launching DoomGLES, the first screen you are presented with could be referred to as the launch screen. This is where you can select which one of the classic DOOM games it is that you want to run. In addition, you can also configure some visual options and game settings from this screen.

If you are running DoomGLES without having installed any of the full games, the only option that will work for you is "Doom1." This will load the original DOOM (non-Ultimate DOOM) and will only have the first episode, Knee Deep in the Dead available to play. This is the shareware version which, as I stated in the video above, was one of the most widely downloaded pieces of software of all time. For any of the full games that you have installed, you can select the corresponding option to launch that DOOM game.

If you aren't sure how to configure your launch options, I would recommend starting off with how I have it set in the preceding screen capture. This will allow the game to visually look fairly pleasing while also providing for solid performance. If you turn on the enhanced liquid textures by selecting "Blood" and "Water," then your battery will be eaten up at a faster rate due to the graphics processor having to work harder. Additionally, I have my game set to allow me to move around with one thumb, and to look/aim/shoot with the other. Lastly, I selected "No Always Run" to allow for some granularity in how fast movement occurs based on how quickly you swipe with your thumb. If you uncheck that option, you may find that the character moves too fast to comfortably control. Of course, these settings are all personal preference and I would recommend playing around with different combinations of options and deciding what works best for your enjoyment of DoomGLES.

As for the game itself, the developer, Ryssen, brought the visual quality of OpenGLES to DOOM, making everything in the game completely three-dimensional and giving the textures a considerable boost in fidelity. Essentially, it is still DOOM, but it will look as good as id Software's next game, Quake. It plays exceptionally well for a mobile port of this type of game, and once you get accustomed to the feel of the controls and physical space with which you have to play, DOOM on your BlackBerry becomes a real treat!

If you aren't already familiar with DOOM, the game consists of different levels in which your character, a space marine (and often referred to as "DOOM Guy"), must navigate his way through demonically-invaded bases on the moons of mars. The objectives are simply to kick some demon behind, find as many of the secret areas as you can, and most importantly--to get to the exit of each level alive! You will also need to pick up key cards to open locked areas along the way.

When you see a door with a red, blue, or yellow/orange outline, that means you need the corresponding color key card to open that door. While certainly not the most complex game, especially considering today's standards, the action-packed, exhilarating experience of being surrounded--sometimes bombarded--with demons and having to blast your way out can provide for hours upon hours of fun!

The famous (perhaps infamous) room in which a player is presented with a fake exit switch, which when pressed, leads to a massive ambush.

The first confrontation with a Cyberdemon, arguably the most iconic demon and boss from the entire DOOM franchise. Yes, that's a rocket launcher mounted on his arm!

So, in closing, I highly encourage both new and old DOOMers alike to check out DoomGLES in the BlackBerry App World and savor every moment you have playing it. It truly is a video game that we all should be thankful was developed, as it set into motion the wheels of inspiration and potential for countless (if not the majority) of future action/shooter games to come. For me, I think I've been playing DOOM since I was in Kindergarten, and I have no plans to stop, for it is truly a video game that has survived the test of time.

Be sure to call for reinforcements in the comments if you need any further assistance with installing and setting DoomGLES up. I will do my best to respond to you! Happy gaming!