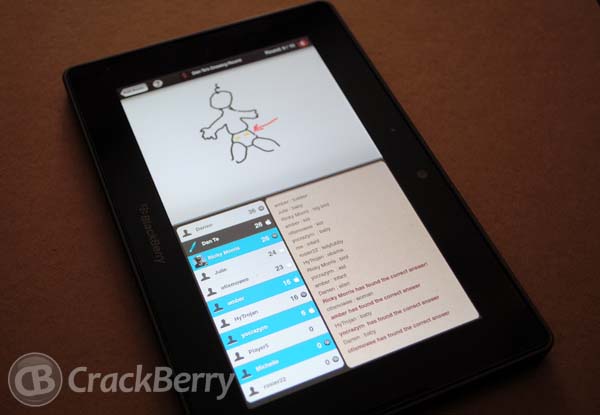 The recent craze on iOS and Android devices is a new game called Draw Something. Modeled after the classic game of Pictionary, you play against an opponent, taking turns drawing a picture for the other person to guess. Draw Something is not available on BlackBerry yet, though it is likely it will be brought to our platform in the future.

How about, instead of worrying about what apps we don't have, let's look at one that we do have. Sketch W Friends is a real-time, multi-player game also based on Pictionary. I tried this game out on my PlayBook, and I have to say, it's super addicting. Instead of only being paired with one person, you play in a room full of other people. Each takes a turn drawing while the rest of the players guess. You earn points not only by guessing correctly before the time runs out, but also when people correctly guess your drawing. It's fast paced, it's challenging, and it's a whole lot of fun!

Sketch W Friends is available not only for the BlackBerry PlayBook, but also for Android tablets and the iPad, so you can play with your friends no matter what platform they have! You can link your Facebook account to the game and keep track of your score and the competition. This game was developed by XLabs, the same team that brought you Groovy Notes, among other apps. You can pick up Sketch W Friends for just $1.99 in BlackBerry App World, and it's worth every penny.