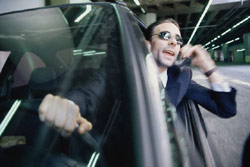 This from the Intranetics Motoring News Service (Who knew that Intranetic Motoring was so important it required its own news service). If you are a motorist in the UK who likes to put the foot down and use your BlackBerry at the same time -- watch out, you might be in for a nasty shock.

The UK is now covered with mobile speed cameras and they will soon be used for some extra detective work. If you are photographed using you Blackberry, PDA or cell phone while driving you can expect an extra ₤60 pound fine ($100) and three points on your license.

Although the primary function of the cameras will continue to catch people doing five clicks over the speed limit, police forces now say that anyone photographed by cops using their mobile device are going to be prosecuted.


Meredydd Hughes, the head of roads policing for the Association of Chief Constables and the chief constable of South Yorkshire, is quoted as saying "If officers using mobile cameras see someone using a hand-held phone, whether with their own eyes or through the lens of their camera, then they are fair game….there is no policy currently to trawl photographic evidence from speed camera images to target mobile phone users. However, that is not to say that we can't change the policy."


Official figures indicate that in 2005, 13 people were killed and 400 injured in car accidents in which a driver was using a mobile, according to the Scotsman newspaper.
In the UK it is now illegal to use a mobile device such as a BlackBerry without a hands free function while driving. However, the new ruling also says that motorists deemed to be “unduly distracted by hands free devices” can be prosecuted. Most driving organizations are on board with the police chief, but we can see a more than a few angry motorists getting a shock in the mail.


We at CrackBerry suspect it’s only a matter of time before this little trend makes it to North American where the movement to ban mobile use while driving is already well underway and the police services are always eager to capitalize on new revenue.