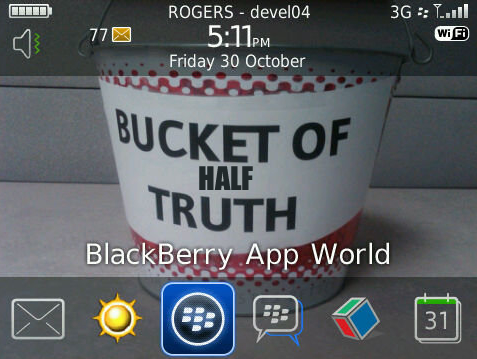 A few days ago we covered a story that was posted on the Inside BlackBerry Blog. RIM had posted that they would be answering questions regarding BlackBerry App World and clearing up some unanswered questions about the application. After some issues with the blog not accepting questions being submitted another post went up yesterday, the second half. In it you'll find some common questions but one specifically may peak everyone's interest.

"Why won't BlackBerry App World work with my leaked OS?"

While I appreciate the power user's need to have the latest and greatest, you are using something that has not been publically released or fully tested, and of course has not been approved for use. You should only use the latest released OS for your BlackBerry smartphone - available from your carrier or at BlackBerry.com - and we think you'll find that everything will run smoothly on finalized (read: public) product.

A relevant question. But that answer doesn't really sit so well with me and probably not many others out there. It sounds as though running a leaked OS is the cause for all things not working right? But..Umm..how can this be? Considering some of the issues we have seen with officially released OS' on devices these days, we as users certainly know what was said is NOT the truth here. We could start off with themes not working (9530), media player bugs, menu system errors (9700) and the list really does go on and that folks, is the truth. Keep reading.

I really hope someone at Inside BlackBerry makes the adjustments needed in that article, sure it may be a reasoning as to why BlackBerry App World may not work but to say an official OS corrects everything is just wrong. Even on official OS' App World is just one item that still has issues. Official OS releases often times have the same bugs in them as the leaked versions we see. Remember, some leaked versions actually do get approved for carrier release. Sure RIM has tons of employees running beta firmware, but maybe RIM needs to hire all of CrackBerry as OS beta testers - our readers and members definitely find every glitch and fast.

I figured we should show some examples of this happening, keep in mind these bugs are all found in official OS releases. While some have been acknowledged and will be corrrected, others remain unmentioned.

And just to really drive the point home on this mini-rant, let's take a look at what at least one certain (and huge!) BlackBerry carrier thinks about running a leaked OS on your BlackBerry. Below is an email boiler plate that has been forwarded in by Verizon customers to both Kevin and our CrackBerry tip line now on more than a few occassions. The names have been removed. Get ready to laugh:

Thank you for contacting Verizon Wireless through our website. My name is ________ and I understand you are looking for additional information regarding the OS update for the Tour since seeing that other carriers have released an update.

I apologize for any delay in providing the update you are anticipating, and can understand wanting the latest and greatest OS to ensure your device is running smoothly as it should.

________, we still have not received any word regarding our official release for an OS update for the Tour and I truly apologize for any inconvenience. I usually check with third party sites such as crackberry.com and phonescoop for information regarding OS releases from our company although there are no guarantees that the information listed will be accurate. They do however; provide information that comes very close to being correct and exact. Crackberry also posts links to unofficial OS updates and user reviews which may assist with determining if the update will work for your device or correct some of the issues you have experienced.

Another option would be to sign up for E mail updates at www.verizonwireless.com/emailupdates where you will be notified of upcoming products and services.

We appreciate your business and I thank you for using Verizon Wireless. If you have any additional concerns or questions please reply to this e-mail.

Pretty interesting huh? It makes sense though. In a competitive marketplace, carriers want their customers to be happy and not be jumping ship. Since official OS releases obviously do not always solve all issues with a device, leaked firmware and sites like CrackBerry.com play their role in keeping RIM's customer base as happy as they can be.