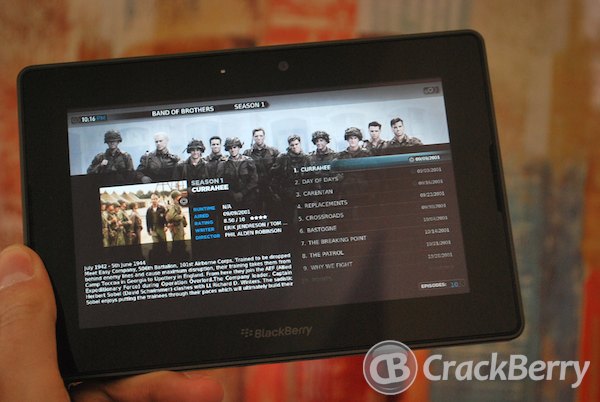 Outside of my Netflix subscription, Plex is how my whole family watches movies.  For those of you unfamiliar with Plex, it's a media utility consisting of a server and a client.  The server runs on any computer, and the clients run on computers, mobile devices, or even the Apple TV (if jailbroken).

I run the Plex server on my iMac.  I keep all our content on an Apple Time Capsule.  I have a couple of Apple TV boxes (one for each TV).  And I've got the $5 Plex app for my older, first generation iPad.

It pains me that there is no Playbook client for Plex.  I've got two gorgeous Playbooks in the house and everyone loves the form factor for movies.  Apparently I'm not the only one who wants a Playbook Plex app either.  Guys in the forum are converting the Android APK file into a BAR and sideloading it.

Back to that in a moment.  For now I wanted to point out this horrible April Fool's joke that Plex blogged, thinking it was funny.  Sorry guys, not funny.

The gist of the joke is Plex has been acquired by RIM.  They go on at length about the greatness of RIM.  They mention magnificent sense of design, the inspirational new CEO, the fact that everybody owns a BlackBerry.  Since the whole thing is a joke, clearly the author feels the exact opposite about RIM.

I have to assume the executive team at Plex was in on the joke, which is the bad part.  You'd have to be an idiot to blog something like this without having the approval of your CEO (unless you're looking to get fired).

Anyway, this probably means Plex has absolutely no plans to support BlackBerry.  And that stinks.  Especially since it should be so easy for them to repackage the APK and drop it into App World.  People on the forums are doing it and it seems to work.

But no ... apparently supporting the Nook Color is more important, as is kicking RIM while they're down.

I'm going to head over to the Plex blog and drop a comment.  I hope you'll all do the same.  Maybe we can  guilt them into repackaging their APK as a way to make up for this poor-taste joke.