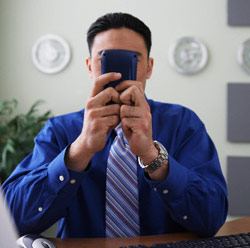 The world of the CrackBerry is now afflicted with yet another form of anxiety disorder. According to the Guardian Newspaper in the UK, the latest form of distress to haunt Blackberry and mobile users is called “ringxiety.”

Britain apparently is coming down with this latest of maladies. “Many of us will be familiar with the basest form of ringxiety - when one phone rings and everyone in the vicinity suddenly starts checking their pockets or handbags with frantic abandon,” says the article’s author. But some cases are far more serious and some individuals have reported hearing their phone ring at concerts, while driving or even while in the shower.”

The anxiety is being compared to phantom limb syndrome, where amputees still feel the sensations of a limb that isn't there any more.

The phrase came from a professor from California (of course). David Laramie, at California's School of Professional Psychology in Los Angeles claims he is a sufferer himself, and believes even some inaudible sounds can create the perception that his phone is ringing. He also claims his ringxiety can be sparked by simple things such as TV or radio commercials.

We at CrackBerry.com experienced this ourselves yesterday. We posted a commercial on the site. The ad features a ringing BlackBerry and every time someone in the office watched the video everyone looked at their own BlackBerry. Very strange.

According to the Guardian story even vibrations can trigger the same response.