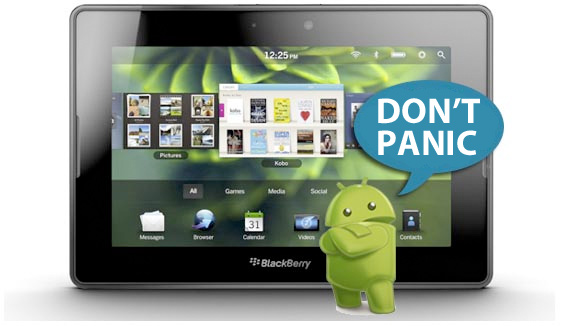 A rumor hit the internet yesterday in regards to the much-anticipated Android App Player for the BlackBerry PlayBook stating that the feature won't arrive until "late fall" despite RIM previously stating that it will arrive late summer. The information was said to come from a "reliable source."

I've been keeping pretty close tabs on this one since getting my in-depth App Player walk through during my recent trip to Waterloo, and from what I'm seeing/hearing things are still on track. As it stands now developers should be getting access in the next two to three weeks, and from there it should just be a couple more weeks before owners are officially running Android apps on their PlayBooks (devs will need a bit of time to bring over their apps and I'm sure RIM will want to ramp up a bit of marketing hype behind it too). So late August/early September still seems to be in the cards vs. late fall.

So as of now, I say don't panic! If for whatever reason by the end of August we haven't seen RIM roll out access to developers, then I'll more seriously start to worry about delays.