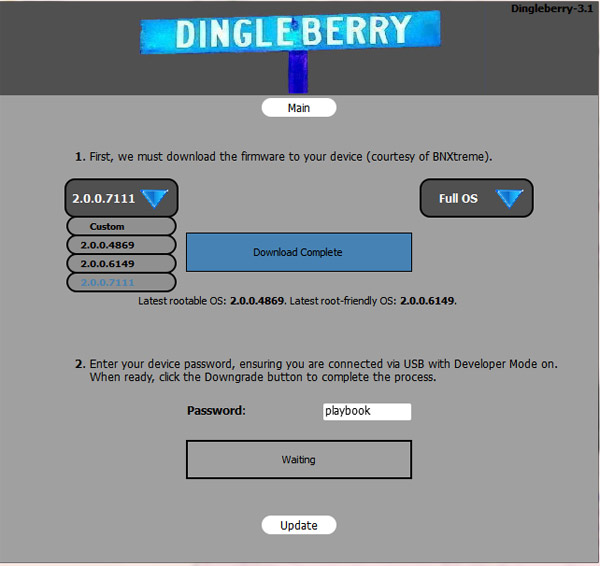 Well, that didn't take long! The good people of the DingleBerry team have just released version 3.1 of the DingleBerry rooting tool. Just a few days ago, DingleBerry 3.0.x was released, bringing one-click root and the HuluBerry app for the PlayBook. Rooting your BlackBerry PlayBook allows the device to do things it wasn't designed to do, like downloading applications from the Android Market.

The latest 3.1 version of DingleBerry brings the ability to load any BlackBerry PlayBook OS onto your device as well as some small bug fixes. DingleBerry 3.0.x loaded only the core OS on to the device, sometimes causing problems with the tablet. D3.1 has the rare ability to load only the core OS or the entire OS which includes things like the browser, the Android operating system, and other BlackBerry applications. Also included is the ability to create a Custom OS. Our readers in the Hybrids forum might want to have a look.

Research In Motion recently released its beta version 2.0.0.7111 for the BlackBerry PlayBook, patching the root access gained by DingleBerry. D3.1 doesn't address that update, and .7111 remains locked. Still, you can be sure the team is hard at work on their next version. Until then, you can always downgrade an earlier PlayBook operating system. You do have to make a decision: are the improvements in .7111 more or less important that HuluBerry and rooting?