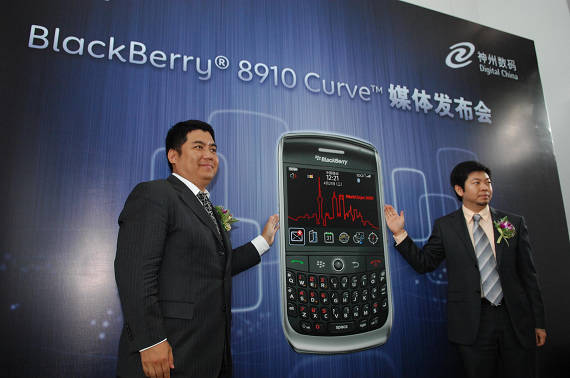 The device haslong been talked about and it started a good many debates over what, exactly it was and what market it was intended for. Finally, the BlackBerry Curve 8910 has shown up in China in official form. Digital China and Research In Motion issued a press release today confirming the device and listing out the specifications for everyone to see.

Many people may still be asking why? But for the market it has been released in, this is a perfect addition to the BlackBerry line up. One thing we're left wondering here is why the trackball? Don't get us wrong, the replacement trackball is our #1 seller in the shopcrackberry store, but RIM - why would you ship new phones with the trackball still since the trackpad is so much better. And what of the BlackBerry 8980? The 8910 and the 8980 have both been referred to as "Atlas" so some unanswered questions remain here with this release.

"With the increasing popularity of smartphones in China, we are delighted to offer the BlackBerry Curve 8910 smartphone through our retail distribution network in China,” said Guo Wei, Chairman and CEO, Digital China. “Around the world, the BlackBerry solution is recognized as a leading communications and productivity tool. This will surely be beneficial to Chinese professionals and retail customers as their desire to do more while mobile rises.”

BlackBerry Curve 8910 Smartphone
The BlackBerry Curve 8910 smartphone features a wide range of advanced communications and multimedia capabilities, allowing customers to remain connected, productive and entertained while on the move. It features the industry’s leading mobile email and messaging solution together with an exceptional phone organizer and advanced multimedia applications. It also enables access to a variety of popular services in China that have been optimized for use with the smartphone. In addition, the BlackBerry Curve 8910 features built-in GPS for location-based applications, Bluetooth® (2.0), a next generation processor (512 MHz) and a dazzling hi-resolution display.

At approximately 110 grams and 109 x 60 x 13.5 millimeters, the BlackBerry Curve 8910 smartphone is the thinnest full-QWERTY BlackBerry smartphone yet. Its sleek and refined design feels comfortable for both one-handed or two-handed use, and the smartphone's large, striking 2.4 inch HVGA+ display (480x360 resolution) projects vivid color and makes text, pictures and video a pleasure to view. Its full-QWERTY keyboard allows users to type messages quickly and easily edit Microsoft® Word, Excel and PowerPoint files directly on the smartphone, using the preloaded DataViz® Documents to Go® software suite.

The BlackBerry Curve 8910 smartphone's advanced multimedia features include a 3.2 megapixel camera with variable zoom, auto focus, and a powerful flash that also provides continuous lighting when recording video*. Its rich media player supports streaming and can play your favorite songs and videos. In addition, it features a 3.5 mm stereo headset jack, support for the Bluetooth stereo audio profile (A2DP/AVRCP), dedicated volume controls and a microSD/SDHC expandable memory card slot that supports up to 32 GB cards, giving users plenty of storage that is easily interchangeable.

* Video recording requires a microSD/SDHC memory card, which may be sold separately.