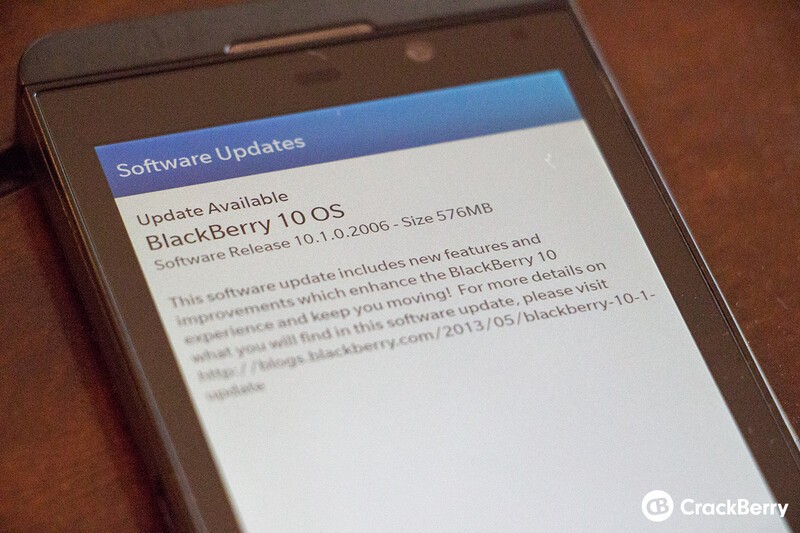 Last week, AT&T cut short the rollout of a 10.1 update to the BlackBerry Z10. This is no doubt frustrating for AT&T customers who only have to glance sideways to their Z10-toting buddies on T-Mobile who are enjoying a generous batch of new features. So what’s the deal?

The short answer is that BlackBerry had pushed out the update before AT&T had completed their technical approval process (which is why BlackBerry was the one issuing the statement about it and not AT&T). It sounds like the snag was based on a process formality, and not an issue of some disastrous bug that required a clawback. It's entirely possible that the exact same update will go public with no changes after AT&T's done looking at it. Ultimately, very few users even had the chance to download the update since push notifications weren’t sent out, meaning it was only available to those that had recently rebooted their device or happened to hit their monthly update check during a small window.

Here’s what AT&T told us about their overall device testing process.

"Every handset launched is subject to weeks of external testing to assure every device delivers a quality experience for customers. Before a device reaches AT&T labs it goes through testing with independent labs. Each device must be PTCRB certified in order to be submitted for AT&T’s Network Ready testing. PTCRB is the North American standard for testing wireless products and gaining PTCRB certification is a requirement for a product to work on a GSM-based wireless network. Testing includes (but not limited to), radio frequency testing, UV exposure testing, water testing, drop/impact tests, abrasion/scratch tests, chemical tests, application tests (streaming quality of apps), bandwidth usage on network, and field testing (voice quality, simultaneous data/voice, usage time.) "

Obviously a lot of that involves the physical body of the device and applies to its initial launch in addition to software rollouts later, but you get the picture. AT&T also said that even with this structure in place, testing time can vary device by device, and one can imagine that the sheer volume of Android devices they have to go through might slow down the process for everybody involved. After talking to BlackBerry about OS testing, it was clear that carriers can have dramatically different standards for testing. In fact, the 10.1 build BlackBerry had sent to AT&T was the same one that was sent to T-Mobile.

BlackBerry’s primary interest is in maintaining positive relationships with carriers, which is vital to maintaining in-store visibility.

Sometimes carriers will bounce back something to BlackBerry that simply has to do with a buggy implementation of pre-loaded carrier software, but whatever happens, it’s clear that BlackBerry works closely with service providers to make sure they get everything they need. This has been a long-standing approach for BlackBerry, and exists in stark contrast to, say, Apple, which generally rolls out iOS updates on their own watch. BlackBerry could technically operate this way if they wanted to, and in a high priority situation where a vital update needs to be rolled out quickly, they very well may. Barring that rare scenario, BlackBerry’s primary interest is in maintaining positive relationships with carriers, which is vital to maintaining in-store visibility.

We’re hearing that Verizon’s 10.1 update is coming down the pipe very soon, which could leave AT&T with quite a few more jealous Z10 owners, though an official update from AT&T should be made available very soon - rumors in the forums are suggesting July 1 is the day to look out for. More impatient owners may want to shoehorn a leaked build onto their device, but at least they can rest assured that they aren’t left altogether in the dust by their carrier, as is the case for many Android users.