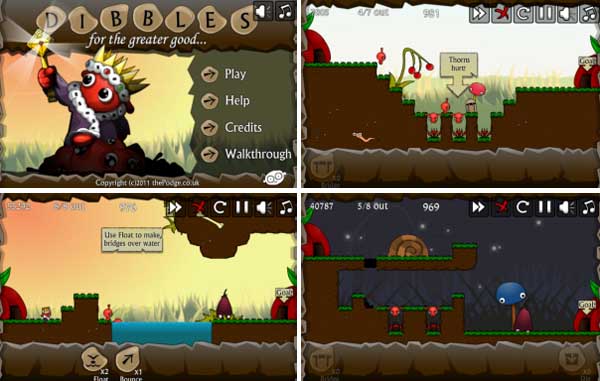 I used to love playing Lemmings when I was a kid, so I was excited to find Dibbles by thePodge for my BlackBerry PlayBook. It's the same classic concept, save your king by passing over treacherous paths and sacrificing your people as needed for the greater good. You are given a limited number of different command stones to place before obstacles; the first Dibble to reach the stone carries out the command, ranging from making a bridge of themselves to popping off their head to become a bouncer for the following Dibbles.

The animation and graphics are great, gameplay is smooth and easy to pick up. For $.99 you get 33 levels to play through. Hopefully more will be added in the future. Dibbles was developed by thePodge, who brought us other fun PlayBook games like A Zombie Stole My Toaster and Cannibal Casserole. You'll definitely want to check them all out.

For more information and to purchase Dibbles