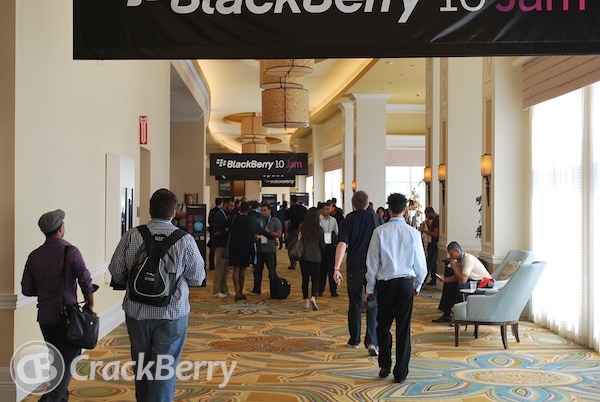 On Wednesday I had the pleasure of attending the 2nd annual Application Developers Conference, put on by Scotia Capital. There was a big focus on BlackBerry at this event, considering that it was held in Toronto, and what I'd like to do here is report on the main highlights I took away from the event.

I applaud Gus Papageorgiou, the analyst at Scotia Capital who organized the event. Nobody was hosting an event for the financial community to learn about the investment opportunities in the mobile app market. He designed a great lineup of speakers and put on a fantastic conference. I sincerely appreciate him inviting me to attend.

The app market is bigger than you realize

The keynote speaker for the conference was the incredibly smooth-talking Ray Sharma, founder of XMG Studio. Ray is a former Wall Street / Bay Street financial analyst who covered the wireless sector for many years. He was my competitor at the time. But he left the Street to start Extreme Labs (mobile development shop), Extreme Venture Partners (a VC company) and XMG Studio (one of Canada's largest mobile gaming companies). There aren't too many people who understand the financial market and the app developer market like Ray Sharma.

Ray pointed out that the app market is expected to hit $50 billion in annual revenue by 2015. That is a HUGE number. It puts the app market ahead of traditional (console) gaming, movies and the music business.

This is a business that hardly even existed prior to July 10, 2008 when Apple launched the App Store.

So keep this in mind. The app economy is bigger than pretty much every other form of entertainment out there. It's gi-frikkin-gantic.

Ray also explained the current breakdown of apps by category. It turns out that 88% of the entire app market consists of games, social media apps and news. Games is the largest chunk at 47%. This shows you exactly where RIM needs to meet consumers with the launch of BlackBerry 10 (and why we're so excited to have a guy like Anders Jeppsson heading up the gaming side of RIM).

Despite being a Canadian, and intimately familiar with RIM, Ray's XMG Studio does not build for BlackBerry - at least not in any serious way. But I did chat with him about this. His point of view is probably very common among game developers. The BlackBerry Playbook doesn't have enough volume to bother with yet. But when BB10 hits the market, it's a no brainer ... so long as the Unity SDK that his firm uses for game development offers solid support for BB10.

Apple is still the gold standard for developers, and that doesn't seem to be changing much. The developer tools, documentation, and submission processes are all very simple and well done. Gotta love Apple.

There are really only two complaints people make about Apple. First, they are a strict gatekeeper to their store. They'll reject apps that don't follow their view of how the app should work. You have to do it their way, or go away. Second, the capabilities are somewhat limited. One enterprise-centric developer talked to me about the inability to reliably push emergency messages out to users on iOS. He said the push environment is completely unreliable, and can't be trusted to an app that needs fast message delivery and confirmation of delivery. This, folks, is where RIM shines.

The developer audience at the conference had a love / hate relationship with Android. Given the numbers, it's impossible to avoid the platform. But coding for Android is in no way a pleasure, based on the comments I heard. One developer said that an iOS app required another 3-4 weeks of tweaking to get it to run properly on Android. And even then, it‘s hard to get paid (see below).

The biggest problem developers see with Android is form factor and OS fragmentation. iOS developers hate this, while BlackBerry developers are more used to dealing with it (but still don't like it).

Developers at the conference also felt that Android was tougher to monetize. I don't want readers to take this the wrong way. Developers didn't say that Android users were "poor" or anything like that. But it's true that fewer Android users carry credit cards and fewer of them have extra money to spend versus iOS or BlackBerry users. More Android users seek out free alternatives vs. paying.

Oh, and here's a crazy stat for you. The Android marketplace lets users refund an app purchased within 15 minutes. One developer said the refund rate is about 50%. Crazy, right? How can you make money when half of your customers are only playing around, with no intention to actually pay for your app.

Most of the presenters at the conference believed that there is room for another platform to creep in with meaningful market share alongside Android and iOS. This is a good opportunity for RIM and Microsoft, who are both fighting for 3rd place.

And keep in mind the size of this market. Apps are a $50 billion business come 2015. Being third still makes you a pretty big winner.

Overall, the developers at the Scotia conference were very positive on the changes going on at RIM. I think this really goes to show how important a management team is to a company. RIM is currently being led by a new CEO (the mighty Thorsten Heins) and a new VP of Developer Relations (the awesome Alec Saunders).

The developer community is thrilled by the changes Alec has made at RIM. People literally couldn't say enough good things about him. And keep in mind that these comments even came from people who left RIM for dead last year ... people who thought RIM was in such deep trouble nothing to could save them. Now, these same people are feeling much more optimistic.

One developer who admitted to pulling the plug on most BlackBerry development 18 months ago said that RIM's QNX-based BlackBerry 10 OS is "an order of magnitude" better than the other platforms on the market.

Why would he say such a thing? It comes down to the open access to the device that RIM provides, and the powerful multi-tasking OS. I was told that Dan Dodge (the man behind QNX) has promised developers they'll have access to every single API that RIM has. No more internal-only APIs. This is a huge change for RIM, and one that developers are ecstatic about.

In one panel discussion, the question of carrier billing came up. For those unfamiliar, RIM leads the market in carrier billing relationships. Customers can buy apps and have the payment tacked onto their mobile bill. Smarter Apps, the company behind games such as Angry Farm and other popular BlackBerry games, told us that 50% of their sales are now coming from carrier billing. Nine months ago carrier billing was only 5% of sales. Carrier billing is really important for customers who don't have PayPal or a credit card. For the developing markets, this matters.

Here's a direct quote from Smarter Apps director Paul Dumais. "It's so easy to make money on BlackBerry". When asked to elaborate on this, he came back to carrier billing, and the fact that most BlackBerry users in the developed world have credit cards. They are willing to pay for apps, unlike on Android. And more importantly, there isn't a huge pile of competition in App World. So as long as you put together a good quality app, making money is easy.

RIM recently launched a program where developers can have their apps certified, giving them a "quality certified app" stamp of approval. Certified quality apps are guaranteed, by RIM, to earn the developer at least $10,000 so long as the app sales hit at least $1,000 in the first year.

At yesterday's conference, one speaker pointed out the brilliance of this program. It will raise the bar of quality. App developers will now be willing to invest enough time and energy into polishing their applications so they'll be certified as quality apps. The price of $10,000 in guaranteed revenue is worth working for. This program should cut down on the number of poor quality apps in App World.

Cascades, a new user interface framework introduced by RIM in BlackBerry 10, is one way to achieve this higher quality app experience. Cascades should make it easy for developers to create apps with a consistent look and feel.

Extreme Labs was on hand to demonstrate its AccuWeather app, using the Cascades interface, and ported to a BlackBerry 10 dev alpha device. Its Principal, Sina Sojoodi, sung the praises of Cascades. He said that writing the code for the UI is very similar to writing Javascript, and that hardly any of the code was done in C++.

Developers are loving the quality of the tools that RIM is putting out there now. It's a complete 180 from the RIM of BlackBerry Past. Huge kudos to Alec Saunders, the QNX team, the TAT team, and all of the RIM people who've been blasting away at BlackBerry 10. Oh, and let's not forget the people in the C-level offices who let these guys do what needed to be done.

It's clear, from talking to developers, that RIM has a solid chance at making a strong comeback. But execution remains the critical factor. Despite all of the positivity and hope in the room, not ONE person debated this view: If RIM fails to execute on BB10, it's lights out. Goodnight. Over.

BlackBerry 10 is RIM's Hail Mary. They need it to go well. And there are no guarantees it will. But if what we're seeing so far is any indication, RIM is climbing back from the dead. They're fighting hard. There are new people at the controls of this machine, and the've been busy building new weapons.

All we need to see now is commercial launch. Let's go RIM. We're rooting for you.