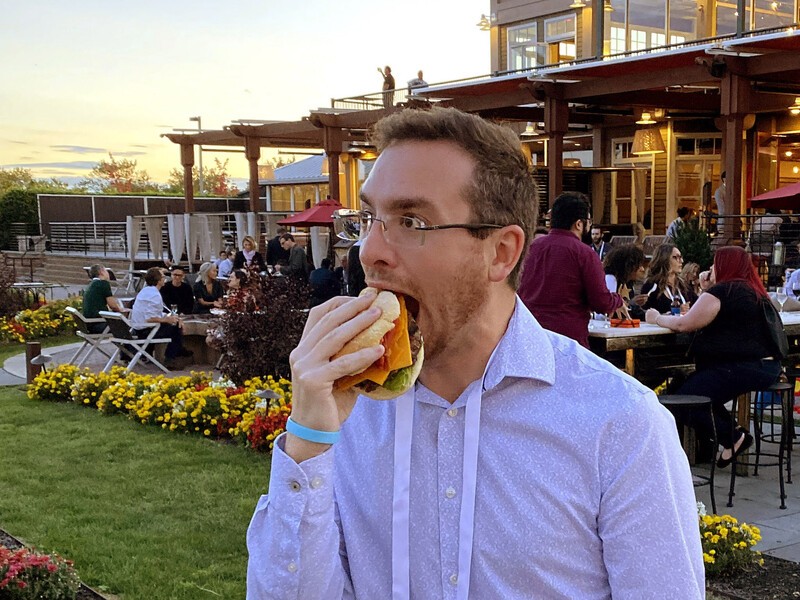 If you've been reading CrackBerry recently, you might have noticed my name a lot around here. So what the heck is going on? Who is this guy? Why are we all here?

I'm Derek Kessler, the new Editor-in-Chief of CrackBerry, and I'm thrilled to be joining you all on what will be an exciting ride.

If you've been following CrackBerry for a while, you might recognize my name. Back in 2009 I started writing for one of CrackBerry's then-sister sites: PreCentral, focused on the nascent Palm webOS platform and the new Palm Pre. I eventually went on to run that site, including a rebrand as webOS Nation to reflect the expanding webOS ecosystem… and then everything went to shit.

Palm got bought by HP, who was planning to do great things with it, but then HP got a new CEO who canned the whole project. I was devastated, the whole webOS community was gutted. Like many CrackBerry diehards, I know the value of a physical keyboard smartphone, and I know the heartache of a company and product you loved being flushed down the toilet. It suuuuucks.

Eventually I moved into projects management for Mobile Nations and learned that I'm a halfway decent front-end coder (the side of the website that you actually interact with). And having worked at every level from junior writer to cross-brand manager, I had some strong opinions on how this should all work and what writers and readers actually need from their websites. I became part of our tech team and helped build the software the site ran on — so if there's something about CrackBerry's design that you don't like, then it might be my fault.

Mobile Nations was bought by global publishing conglomerate, which killed further development of my beloved software platform and I struggled with working in such a large organization. I went from a tech team of five to one over a hundred. It wasn't for me. I joined a smaller company; soon enough we were also acquired by another large company and the cycle repeated. My thing stopped existing and I struggled to be "corporate."

The cyclic journey of life brought me back to CrackBerry, itself with a new lease. At first I was on the tech side again, and I was content with that. I've always been a "maker" at heart, whether it's been words, code, or a woodworking hobby — having something to show for my efforts makes me a happy camper.

Resurrecting CrackBerry meant going big, and there's nothing bigger in tech than CES. We're running a lean ship, so it was all of our handful of hands on deck for CES 2023 — mine included. It'd been a while since I penned any tech articles, but it came back to me like riding a bike.

So Kevin came to the realization that he's more of a "builder" than a writer, my first and true calling as an author has landed me here, writing for all of you fine folks. For better or worse, I'm the new Editor-in-Chief of CrackBerry!

Charting a new path for CrackBerry

So we have a website that was built around a now-dead platform and product that no longer exists. What to do? It's time to expand.

CrackBerry's approach to technology is now broader — but I refuse to make this into just any other tech blog. Anybody can write the news. Anybody can engineer a race to the bottom of search engine optimization. That's not exciting or interesting and I won't do that.

CrackBerry is focusing on what's worth attention in technology. Whether that's interesting or important, fun or infuriating, my goal is cover what actually matters and why. You won't see perfunctory article about boring mid-tier phones or things that will never come to fruition unless there's actually an interesting story to tell about it.

CrackBerry is focusing on what's worth attention in technology — interesting or important, fun or infuriating.

Punches will not be pulled here either, as they rarely are on CrackBerry. If something is awesome, we'll say so. And if something sucks or doesn't add up, you better believe we'll say that too. There were conversations I had with old colleagues where they said what they actually believed but wouldn't dare post for fear of angering a company we had a cozy relationship with. We're not going to do that — as Kevin has branded me: "Maverick".

Most importantly, none of this happens in a vacuum. Context is everything. Perspective matters. Specs are almost universally meaningless. What matters is how the story will impact your life and what those specs actually enable.

If that means CrackBerry is late to a story, so be it. Being first isn't the game I want to play — I want CrackBerry to offer the best and most meaningful coverage. Every article will be something worth writing, and I hope worth reading as well.

Not cutting any corners

Making CrackBerry the best at this will be a slow and steady process, and not just in taking time to write the "how" and "why" of the news instead of just the "what". We're rebuilding CrackBerry from effectively zero — and I'm happy to have an amazing community like all of you.

For transparency's sake, starting from effectively zero also means having effectively zero budget right now. I would love to hire a team of crack writers today to help write about all of the amazing things happening in tech and science and everything else cool and awesome, but I can't do that without money and I'll never ask anybody to write for free. As you might've noticed, there are no ads on CrackBerry right now (assuming you weren't justifiably using an ad blocker). Display ads are the easy way to make money, but I'm right there with how a lot of you feel about them: they're often too scummy and too much.

So there are two ways CrackBerry can make money right now: affiliate revenue when you make purchases through the links on this site, and site sponsorships like we have done in the past. We're not going to spam you with a bunch of Amazon links all day long hoping you buy something — if it's not worth talking about, then it's not worth recommending you to buy it. If you feel like shopping Amazon through CrackBerry, that would make me happy, and the commission we receive won't affect the price you pay.

As for sponsorships, we're always open to hearing from potential partners. Whether you want to put your name up there with "CrackBerry, brought to you by…", are thinking about running ads, or just want to talk about promoting your interesting new thing, we'd love to chat. And yes, dear reader, that could mean sponsored articles or ads on this site, but maintaining editorial independence will be a cornerstone of any such relationship. CrackBerry may promote, but we will never shill. If you're in interested in partnering with CrackBerry, shoot us an email at [email protected] and let's talk about it.

And if you're interesting in joining the CrackBerry team when we're ready to expand, please drop me a line at [email protected]. I'd love to hear from you and start making something amazing together.