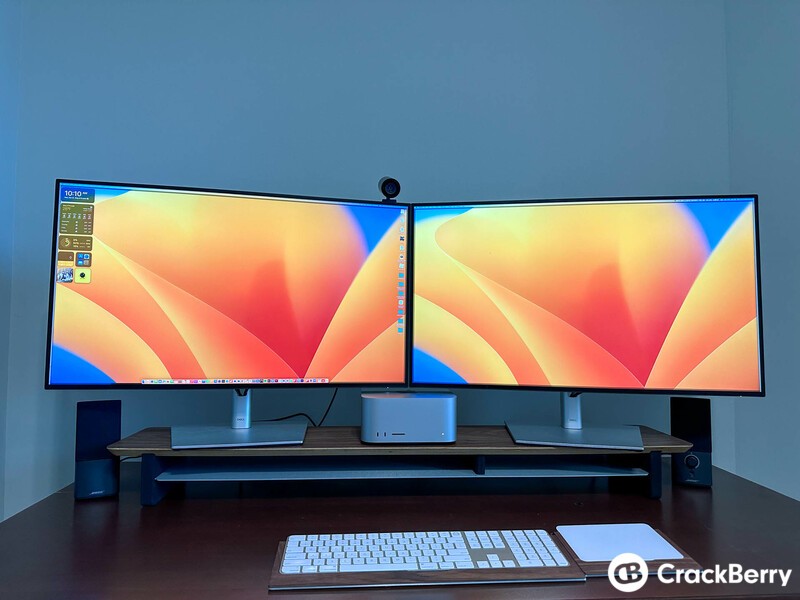 For years I've been a big fan of Dell's lineup of consumer monitors for my home office. The Dell U3219Q was one of the first 4k monitors I tried, and despite trying several others – including Apple's 5K Studio Display earlier this year – I still returned to that monitor. Launched in late 2018, the monitor was outdated by the turn of this year, and when my desk collapsed and both of mine broke, I decided to upgrade them finally.

Looking at a new monitor, I first turned to the Studio Display. Apple's own-party monitor ticked many boxes on paper, but I couldn't stand the poor camera, and the smaller size was a dealbreaker for me. Next, I turned to Dell's 42-inch 4k monitor and found the density was too poor compared to what I had used.

This left me in an interesting place, as Dell's new monitor wasn't available yet. I cycled through a few different 4k monitors in search of something that worked for me and still struggled. Then Dell finally released its new monitor, and I bought two for my home office. As soon as they arrived, I realized I loved them so much that I bought another two for the office.

Dell monitors are probably not the most color-accurate on the market, but this isn't as important given that I don't edit videos or photos. If video editing and color accuracy are important to you, and you use a Mac, the Studio Display is the way to go. For me, ports are far more important than accuracy; this is where the Dell U3223QE shines.

Ports and connectivity is where the Dell U3223QE shines

For years, I've used two monitors side-by-side, and despite trying to move to a single ultra-wide curved monitor, I prefer keeping them separate. I used to have a lot of peripherals plugged into my monitors, which is why I loved Dell monitors; they're full of ports. The previous-generation monitor had 5 USB-A ports, two Display Port, an HDMI, and a few others. The monitor supported daisy-chaining monitors together, and the monitor acted as a USB-A hub, meaning I didn't need to keep a separate hub to plug everything into. Given that my home peripherals stay plugged in, all I had to do was plug in my computer, and I was ready to roll!

Before upgrading to the U3223QE and the 14-inch MacBook Pro with all of its ports, I had to use a docking station to use multiple Display Port cables and everything else. The 14-inch MacBook Pro changed the need for this, except the monitors still didn't support USB-C natively, and didn't have the array of ports that would future-proof it. The Dell U3223QE changes all of this.

Source: Nirave GondhiaThe single button on the back is used for both power and controlling the menu options

When searching for a new monitor to buy, I found that my biggest issue was the connectivity and ports available. The Dell U3223QE solves this in abundance by updating the ports to the latest standards while retaining its core DNA.

The changes between the two models suit my needs perfectly. Here's how each monitor compares in terms of ports and connectivity:

In switching to the Dell U3223QE, I found that I was able to simplify my entire setup. Rather than questioning which port I need to plug into, all five USB Type-A ports support USB 3.2 Gen 2, allowing for the fastest current speeds through USB. The additional USB-C port is very useful as the new monitor supports Picture-in-Picture allowing you to view content from two sources simultaneously.

The Dell U3223QE combines a monitor and docking station in one

Before I got my Mac Studio earlier this year, I connected these two monitors to my 14-inch MacBook Pro, and the 90W USB-C Power Delivery charged my laptop easily. Although rated the same, the Dell U3223QE seems more stable and charges faster than the Dell U3219Q when connected to the same device. The new monitor also supports 15W charging through one of the USB-A ports, allowing you to keep your phone charged up without needing to plug in a separate charger.

Adding an RJ45 ethernet port also added functionality that was missing from my MacBook Pro. The Mac Studio has an RJ45 port built-in, but no laptops come with it, which saves you the need to use an additional docking station. It's essentially a monitor and docking station combined into one.

The Dell U3223QE is not perfect, but it comes close

The Dell U3223QE is a really good monitor for me, but it may be a slight deal breaker for some people. There's no easy way to calibrate it as it comes factory-calibrated. While these four are all the same, I've previously had two same Dell monitors with noticeably different color profiles. It drove me crazy in the past, and while these may all be perfect, it's worth keeping in mind.

There's also a weird bug that seems to be present between Dell monitors and Mac computers. Across the five Macs and four different monitor models I've had in the past eight years, specific inputs will go "to sleep" on the monitor or the Mac, usually after waking from sleep. Getting them reconnected can be a hassle that involves disconnecting and reconnecting the cable a few times until it wakes up. Granted, this hasn't happened yet with the new monitor and my Mac Studio, but I expect it to happen at some point. Is this a dealbreaker? No, but it is annoying and something to be aware of.

The benefits of the Dell U3223QE far outweigh the few gripes I have with it.

If you're a Mac user, never buy the Studio Display unless you stick with it, because it will ruin how you think about other monitors. The ability to change the brightness from your keyboard is fantastic, and it annoys me every time I accidentally try to do this with the Dell U3223QE.

Similarly, the Studio Display has speakers built-in, but the Dell U3223QE doesn't; Dell does sell a speaker that clips into the bottom of the monitor, but I've used an older model in the past. Instead, I opted to use the Bose Companion 2 Series III speakers, which are affordable and great sounding.

Also, if you have two of these, you'll also struggle to get them both to be perfectly straight and aligned with each other; it took a while, but I got close and then gave up on trying to be perfectly straight. Definitely not the right setup if you happen to have OCD. This 'issue' becomes apparent because the monitor can be tilted forwards or backwards, and can be rotated between horizontal and vertical orientations.

These may be dealbreakers for some, but for me, the benefits of the Dell U3223QE far outweighs the few gripes I do have with the monitors.

Why I bought four Dell U3223QE and will buy another two

Before I moved to the US about 6 years ago, I had two Dell U2515H QHD monitors in the UK. When I moved to the US, I bought both of them with me in my suitcase and they survived and served me well until I accidentally broke them both while moving. This sent me in search of an upgrade to 4k and the Dell U3219Q.

The Dell U3223QE offers the specs, performance and connectivity that I'm looking for.

When I went back to visit family in the UK in early 2019, I had to figure out what to buy for my month-long visit, and going forward. I naturally bought the same monitors and docking station I had in the US. This long preamble is all to say that I have three different office locations to maintain and I'm a huge fan of having identical setups in each place so it's just plug and play.

In the UK, I still have the older generation monitors but at some point in the next few months, I'll buy these two for my UK set up. There's no question about it in my mind - although not cheap, the Dell U3223QE offers the specs, performance and connectivity that I'm looking for. With my physical office in the US shutting down, I'm going to have four in my home office and it'll be interesting to see how the Mac Studio handles that.

The best monitor that I'd recommend to everyone

I love this monitor thanks to its ports and connectivity, as well as the flexibility it offers in terms of fitting it into your workspace. Need it in portrait? Check. Want it tilted? Check. Need it at an angle because you have multiple monitors? Check. This monitor can do it all, and for most people, it's the best 4k monitor to buy right now.