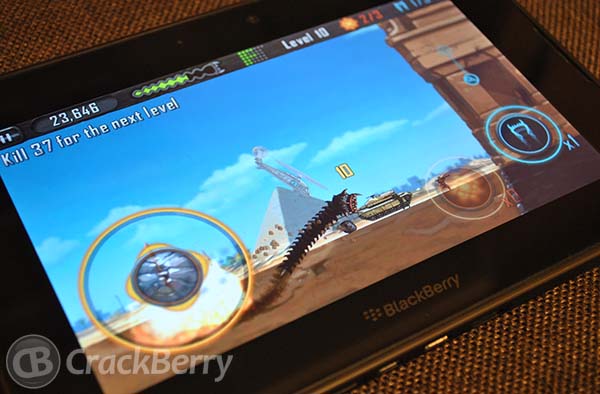 Death Worm is one of those games that you don't know that you want until you have it. Unless you've played it on a different platform, or similar giant worm games, you might look right over it and not give it a second look. But Death Worm by PlayCreek is a game that's pretty hard to put down once you start playing, and it's now available for the BlackBerry PlayBook.

Game play is deceptively simple. Move the worm around the playing field with one hand, and use power-ups such as turbo and fireballs with the other. And the whole time, eat all the people, birds, camels, elephants, Jeeps, ambulances, tanks… you get the idea.

The addictive facet of the game is likely related to the fast paced nature of each level. When you beat your current goal, the new goal to beat to level up flashes on the screen, so there is no down time between levels. You just keep eating, blowing things up, and growing your worm (so to speak).

Death Worm is just $1.99 in BlackBerry App World, and in my opinion it's worth every penny. I downloaded the game tonight as soon as I saw it was available and immediately lost 30 minutes playing it. Let us know what you think in the comments if you play it.