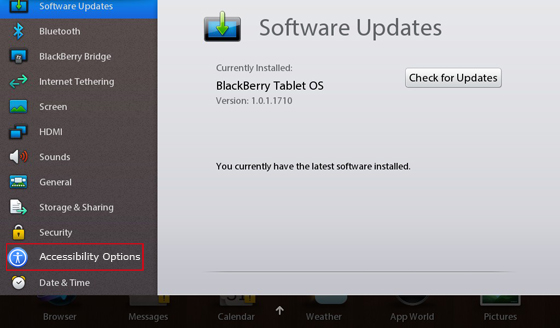 You won't find Accessibility Options on your PlayBook, but hopefully RIM will put it there soon!

There's no doubt RIM is hard at work further improving the BlackBerry PlayBook and BlackBerry Tablet OS. We know they have a lot of things on the go, and we know there are a lot of things that current PlayBook owners have on their immediate list of wants. If you want a good overview on that topic, be sure to check out the CrackBerry forum thread titled Suggestions to RIM for PlayBook. So while the BlackBerry Tablet OS is relatively young and the improvements are coming, the big thing is prioritizing that list. Obviously native email and PIM is big, as are requests for improvements to the autotext and BlackBerry Bridge (need BBM!), and people want video chat. One item that may go unnoticed by many but is the MOST important to some are ACCESSBILITY options. I understand the need for these to be built into the device asap, so that's why were running this open letter to RIM here on the blogs, submitted to us by Aaron Baier. You can read the letter below. And Aaron, I hope RIM hears the message and gets your extra OS options in there soon!

This past week, I purchased a 64 GB BlackBerry PlayBook at my local Staples retailer. However, I was forced to return the product because of its lack of accessibility features. I am extremely disappointed that these features are missing from what seems to be a fairly complete device. My visual impairment requires that I use a larger and bolder font for full access. While I understand the Tablet OS is new and in its beginning phases, I sincerely hope that a complete set of accessibility features is soon on its way.

While applications like the web browser and Documents To Go are relatively accessible due to the pinch-to-zoom functionality, there are many essential areas which remain inaccessible. These areas include but are not limited to: Bridge Messages, Tasks, Contacts, etc; App World; Settings Screen; and other third-party apps. The 7" display on the PlayBook is awesome, but it is unfortunate that I was unable to truly take advantage of that real-estate. I look forward to when your team integrates full accessibility features into BlackBerry Tablet OS. Features such as font style and size adjustment are essential and even a way to quickly switch between normal and high contrast views would be truly amazing.

In fact, it was the BlackBerry Smartphone OS which attracted me to Research in Motion, Ltd. products in the first place, as it offers wonderful accessibility features integrated throughout the OS and Native Applications. When Smartphone OS 5.0 was released, I found the high-contrast colors to be even more functional for me. Furthermore, as I beta test the new Facebook for BlackBerry application, I notice a special feature in the options specifically for the visually impaired.

I also speak about this issue as the Vice-Chair of the New York State Commission for Blind State Rehabilitation Council and member of the National Federation for the Blind and American Council for the Blind. These organizations have adopted devices such as the Apple iPhone and iPad for their accessibility features and I believe the BlackBerry PlayBook to be a much needed professional competitor to these lack-luster devices. Once the BlackBerry PlayBook Tablet OS is complete and includes accessibility features, it will be adopted the same and will increase Research In Motion's consumer and enterprise base. I will definitely be re-adopting the device as soon as I see these features released.

Please understand my severe disappointment with the lack of these features and at the fact that I had to waste a great deal of time to determine this limitation. While I remain a steadfast BlackBerry user, I kindly request these features be added as soon as possible. This is not just for my sake, but to improve the flexibility of the BlackBerry Tablet OS for all end-users. Thank you for your hard work and consideration of what should be essential features of the "first professional grade tablet".