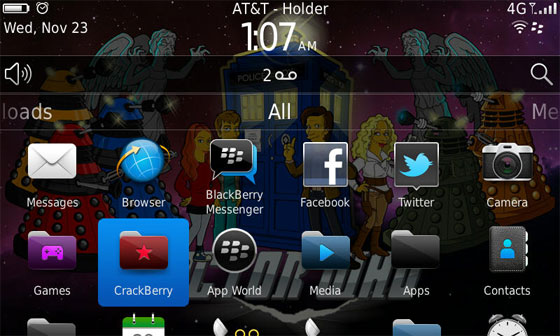 Sure this isn't exactly earth-shattering news, but I thought it pretty cool. You can customize the colors of folders you create in OS 7 on your BlackBerry. The other day, I was making some folders in the All pane so I could move some of my carrier's...um... value-added apps off of my home screen. OS 7 has such a vivid, colorful style to it that I felt the standard black folder icon was a little boring. Poking around in the Edit Folder options ([Link NSFW] like you do), I found a whole assortment of other color options for my custom folders.

As a bit of a blow to my CrackBerry Street Cred, a little digging around on the internet and a chat with my fellow CrackBerry writers revealed this feature has been around for a number of years and quite a few version numbers. Still, it only goes to prove that no matter how long you've owned a BlackBerry, no matter whom you know, there's probably at least something you didn't know it could do.

Read on to learn about creating and customizing folders on your BlackBerry.

Folders can only be created in the All pane (or the home page if you're on a pre-OS 6 BlackBerry). You'll also need to make sure one of the icons in the All pane or the All pane title itself is highlighted (like in the picture to the left). Press the menu key (it's the one with the BlackBerry logo on it) to open the menu. Tap or click "Add Folder"

Type in a name for your new folder. Make it something descriptive like "Browser Bookmarks," "Social Networking," or "Personal" (for those special bookmarks).

Tap or click on the folder icon that's to the left of your new folder's name. In the picture above, I tapped that black folder to the left of "CrackBerry" and was immediately presented with some 21 options as to what the new folder would look like. Tap or click the one you like, and then click Add folder.