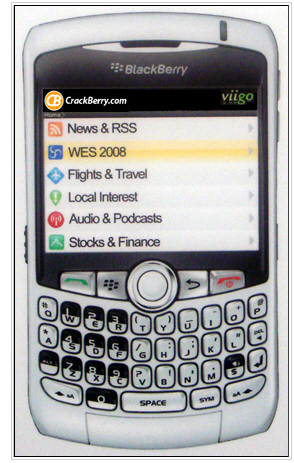 I mentioned earlier this week that I caught a glimpse of Viigo's "Project Tango" in action on a BlackBerry at CTIA, but I promised the guys at Viigo I wouldn't take any screenshots (they're working on some final tweaks and as earlier mentioned it will be fully unveiled at WES in May). BUT... when flipping through my photos from CTIA I just realized I snapped a whole bunch of images off the powerpoint show running at Viigo's booth that basically unveils the app! So without breaking my word, you can check out some of the awesomeness that's coming in only a few weeks to Viigo!

Looking at the snapshots, the first thing you'll notice is the revamped homepage (to your right) which has received a fresh new look and has a lot more options in it. Clicking the News & RSS link will take you into what is basically the existing app (your list of feeds). The screen to screen transitions are iPhone-esque... the pages slide in from right to left (it's a really a nice effect on the BlackBerry).

In addition to the standard Viigo feeds, it seems they have entered into content relationships to bring more useful information by default to your fingertips... this newest release will bring Weather, Stocks & Finance, Flights & Travel and even Sports Scores (not pictured but it was there on the demo I saw) right to the home screen. Last but not least, this next release will feature Audio and Podcasts. With this addition, you'll be able to download and listen to your favorite podcasts right from your BlackBerry as soon as they come out!

The new version of Viigo should be available come WES and you'll be able to get the  updated CrackBerry Edition from our standard download links (on your computer from here on your BlackBerry by visiting getviigo.com/crackberry). Ryan Blundell gave a review/how-to on the existing version of Viigo earlier this week... sorry Ryan, it looks like you'll have to write a new one in T-Minus 6 weeks! More Screenshots after the jump!