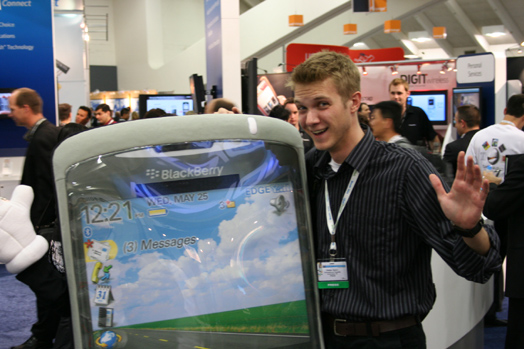 For a Windows Mobile Guy, WMExperts.com's Dieter Bohn Looks
Like he can Play the Role of CrackBerry Addict Pretty Well!

** Update - 12:00pm CST: Just got a phone call from an excited Dieter and Chris letting me know that FaceBook is going mobile and there is a SWEET SWEET application for the BlackBerry. Stay Tuned. We'll have more info and pics on this very soon! **

As promised, our leased BlackBerry correspondent Dieter Bohn (certified smartphone nut who runs WMExperts.com) reported to me last night from San Francisco with the BlackBerry highlights of Day 1 at CTIA.

Was there any big BlackBerry news from RIM to report? Nope. Nothing big from RIM, other than co-CEO Jim Balsillie dropped a line saying "Canada has the highest penetration of per capita BlackBerry Smartphones in the world today". It makes sense - Canada does have a major business hub (Toronto) and a population about a 1/10th the size of the United States. At least Dieter did send along some nice photos (including live shots of Sprint's new BlackBerry Pearl 8130) to keep all of us CrackBerrys satisfied (click here for BlackBerry image Gallery).

But while RIM may not have had any big BlackBerry news, there was a BIG announcement at CTIA that may just impact BlackBerry's relatively unchallenged dominance within the enterprise setting, and that is the coming of Microsoft's Mobile Device Manager 2008. Think BlackBerry BES capabilities for Windows Mobile devices.

It was announced during Microsoft CEO Steve Ballmer's keynote address. Dieter did a Live Blog of the speech, so check it out for more details on Microsoft's Mobile Device Manager. For more details you can also read AT&T/Microsoft's Press Release which came out right after Ballmer's address.

Mobile Device Manager is a new server that will provide mobile workers who use smart devices that are enabled for Windows Mobile with information beyond e-mail, attachments and the Web. Users now will have secured access to applications, files and other information located on the corporate network. For example, AT&T customers using smart devices that are enabled with Windows Mobile and support Mobile Device Manager will now be able to access information such as price sheets, marketing collateral or legal documents on the corporate network — items that were previously available only through PCs or laptops.

At the same time, Mobile Device Manager will give the corporate IT departments of AT&T customers that use Microsoft software new security and management tools that work well with current technologies, such as Active Directory. These tools will increase security and device-management and help customers to manage smart devices similar to the way they manage desktop computers.

It'll be interesting to see how Microsoft does with their move into the mobile enterprise market. From an I.T. standpoint, I can see a lot of reasons why they will do well (every business is already running Microsoft and has a Microsoft knowledgable I.T. person, but not every business has a knowledgable BlackBerry admin). But with RIM's 10 year head start and solid reputation, I don't think too many companys will abandon ship just for the sake of it.