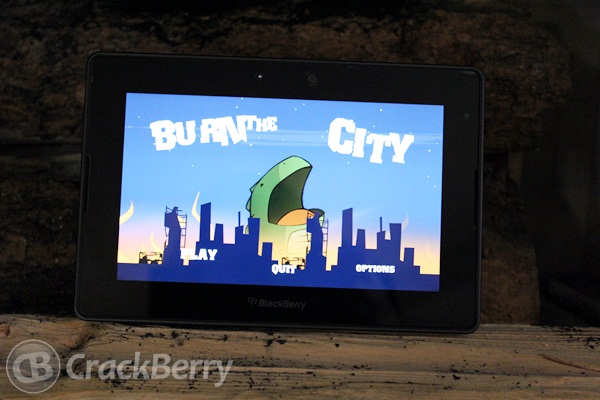 Every few days my youngest brings me my PlayBook and asks me to find her a new game. We spend quite a bit of time searching through App World and yesterday, I found a gem called Burn the City by Union. We've covered their Super Crossfire HD and Air Attack here on the blogs and both great games. Similar to Angry Farm and Angry Birds, the objective is to create destruction on a massive scale by flinging fireballs at entire cities. Burn the City, while not as fast paced as the other two, is a great addition to your PlayBook. Keep reading for all the details!

Fling your monster's fireballs through the air to demolish the city. Simple enough yet tons of fun. You can rack up bonus points with different combinations using your surroundings and maximizing your power-ups. Burn the City is fun and challenging and when combined with their playful graphics, it's a great game for any age.

Burn the City is fun for all ages. Those who love the Angry Birds series are sure to want Burn the CIty on their PlayBook as well. Burn the City is currently available for $0.99 (well worth it) in App World so head on over and download a copy. Let the carnage begin!

Burn the City
by Union

It's only $0.99 so if you only play it a time or two it's no big deal (I think you'll be addicted right off the bat). Fun for all ages and a great game to have for those moments when you just need to waste some time. Purchase Burn the City