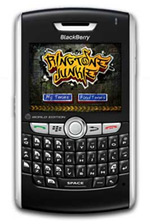 Our friend Alison of Astraware (subsidiary of Handmark) shot us over a quick message this morning. Turns out they have big plans to expand their mobile catalog for BlackBerry customers. New and upcoming titles include bible translations, a new ringtone app and more. The new apps will be available in late May.

I've got to say, the new ringtone app named 'Ringtone Junkie' looks like a good one. As you can see I've included a screen from the application to the right. Read more about Ringtone Junkie at www.rtjunkie.com

Read the official press release after the jump!

"A rapidly growing number of BlackBerry users are turning to Handmark for their mobile information and entertainment needs," said Cassidy Lackey, VP of Handmark Studios. "Astraware, the Handmark Game Studio, focuses on providing only the best mobile content, and we are pleased to bring these new, quality titles to BlackBerry."

Ringtone Junkie - AVAILABLE 5/28
Ringtone Junkie is a new and improved ringtone management application, developed by Handmark, providing access to thousands of popular MP3 ringtones. The application enables customers to download, store, access, and assign custom ringtones to contacts in their BlackBerry Address Book. Ringtone Junkie will be available May 28 at www.rtjunkie.com or www.handmark.com for a one-time purchase of $19.95.

Astraware(R) games - AVAILABLE by 8/31
Astraware, the world-renowned UK-based game developer, will expand its reach by releasing its first games for BlackBerry smartphones in Q3 2008, including Idigicon's highly acclaimed Platypus. Flagship titles Astraware Solitaire, Astraware Sudoku, Astraware Casino and Astraware Boardgames will follow from Q4 onwards. These titles will be available at www.astraware.com or www.handmark.com.