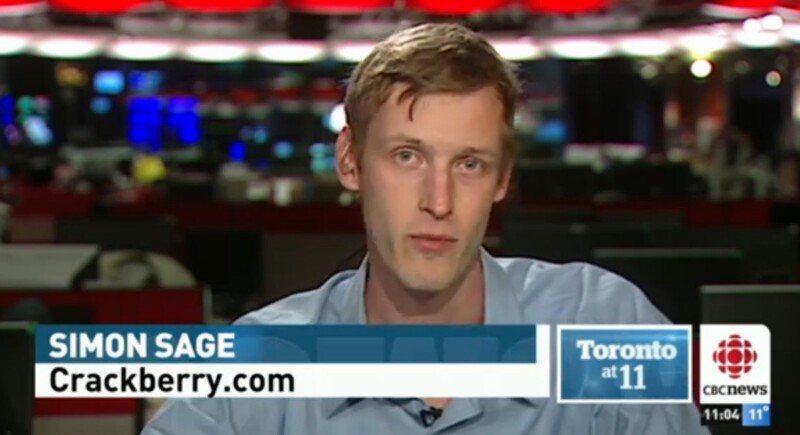 Rotund with turkey and other Thanksgiving goodness, I rolled myself downtown last night to talk with CBC to talk about the open letter BlackBerry plans to put into newspapers today. They only used a small snippet of our conversation, and spent more time on background and talking with folks on the streets of Toronto, but you can find my bit at the 4:40 mark in the video below.

To be honest, my initial reaction was a lot like the first guy they talked to: the letter comes off as a desperate plea, and very defensive. Then I thought about what kinds of messages the public is getting about BlackBerry from the media at large, and they tend to be fairly one-sided towards doom and gloom. Given, there's a good reason to be talking about the challenges ahead of BlackBerry, but if that's at the expense of anything remotely positive or hopeful, then it's natural that there are people out there surprised to hear that BlackBerry's still in business or learn that they launched a new operating system in January. In that context, one can see why BlackBerry might want to provide at least a little counter-balancing perspective.

Many of the messages in the letter we take for granted, like the fact that BlackBerry still has cash in the bank, that they're working on new products, and many of the ones already out there are still seeing plenty of use. For others that only read the occasional newspaper story about BlackBerry when something rough is happening, this might be new information worth taking into account. Specifically, the letter is addressed to current BlackBerry users, and reassuring them that the company isn't going anywhere (a sentiment Alec Saunders was quick to iterate at Jam Asia). For the launch of the Z30, it's important to show this level of confidence because even those that are interested in the product worry about having long-term support - getting some kind of commitment that OS updates aren't going to dry up in six months would certainly help them make the leap of purchasing.

What do you guys think of the open letter? Does it accomplish anything productive? Is it actually meant to speak to BlackBerry fans, or is there a larger message for the public here too? Is this message of confidence justified and believable?