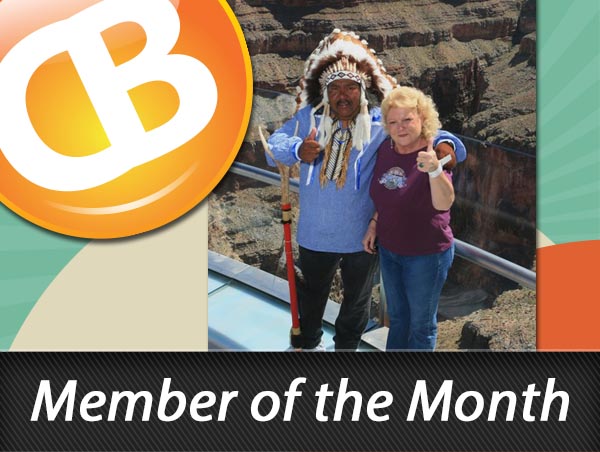 Times are a bit tough in the BlackBerry community lately, but diehard fans know that good times are just around the bend. With a lot of patience we can wait out this turbulence and before you know it we'll have BlackBerry 10 in our hot little hands. In the meantime, our community is still growing and we have no shortage of great people here at CrackBerry. The forums are full of interesting people all sharing a common interest, BlackBerry!

Each month we're going to single someone out to recognize their contribution to our community and post about them right here on the blogs. These members go above and beyond to be active, not only helping out others but contributing to conversation and helping to make our community not just something you visit when you have a problem, but somewhere you feel welcome and want to belong to. Without further ado, let me introduce you to June's CrackBerry Member of the Month, Jafobabe! Keep reading to learn more about her, and don't forget to say hi when you see her around the forums.


You were nominated as June's Member of the Month partly because you are always welcoming and encouraging to fellow members. How do you stay so positive and keep your great attitude?

I'm a 'Chatty Kathy' by heart, and believe that people are always 'all good' at their core.  I like to keep my posts light hearted and positive, and try to bring a smile to their face for whatever the short moment can bring, while learning.  You get farther with 'honey', than with 'vinegar', and retention of knowledge lasts longer.  Laughter is the best medicine, and that's my favorite goal in life.

When most people have issues with their device, or can't make it do what it should, they tend to not explain the whole problem, so you have to ask additional questions to find out what's really going on with their device.   In doing so, you have to type/talk to them, like you are sitting right there next to them, and have known them for years.  This calms them down to where they can explain their issues better. Then when you can give them a solution, it usually resolves the problem.  Happy endings are very uplifting!

How long have you been a BlackBerry user/abuser?

Since Aug 2010 and still going strong!  I love the Blackberry brand, and it works extremely well for my needs.  I know that 2 years is not a long time, compared to others, but I got to the Blackberry platform as soon as I could, and love it!

Why did you join CrackBerry, or what brought you to the site?

I joined Crackberry  (in Sept 2010),  after I purchased my first Blackberry, to get more information from actual users, so I could utilize my phone to the fullest.  I read and read and read.  It wasn't till about a year later, that I started to post, in order to help other new posters.  It is my way of paying it forward, for all the help I got on this site.  I have learned so much over these short 2 years, and have met some really nice people along the way.  Crackberry continues to be the best place to actually talk about your devices and learn things that aren't in the manual (and who really reads manuals anymore anyway?).

What was your first BlackBerry, and which has been your favorite?

Coming from the Razr, I really wanted something better and with more security for my phone, and wanted the Blackberry platform after extensive reading.  I tried to wait it out with my carrier, to drop their prices down some, but to no avail.  So I found an online site that offered the Blackberry at a lower price that could then be incorporated into my carrier, with the new 2yr contract.

The first Blackberry was the 9800 purchased in Aug of 2010.  I Love the form factor, the ease of use, and the security, that has now hooked me to the Blackberry platform. Then almost a year later, and with reading up on the OS7, I was drooling!  It was a tossup between the 9900 and the 9810.  9900 has the better keyboard, and the 9810 has the slider that I favor, and the auto focus camera.  Decisions, decisions.. what to do??  So, since I like to take pictures more than type on a phone, I purchased the 9810 out right from an online merchant in Nov 2011 (and was able to still use the accessories from the 9800).  Saved money right there!

Fast forward to 2012, I have recently purchased the 9900 (from a CB forum member), and swap it between the 9810 almost weekly.  I swap phones more than I swap purses!    I can't just pick one phone over the other, as they each have their own pros.  So, these two are my favorites.

Have any good CrackBerry stories, or how has the site affected you in a positive way?

Oh, there are way too many GOOD Crackberry stories to post here.. LOL.   I get sleep deprivation from staying on this site till early in the morning, reading and posting and having a great time.  I enjoy this site for the diversity of the posters from all over the US and the world.  I can communicate with all, having fun. and doing this all within my locked abode.  Crackberry is indeed addicting!   Where else can you find so many nice and knowledgeable people??  I like to read the breaking news on the front page, and all the excellent reviews from the CB Team.  The fun stuff and contests are over the top!

I continue to learn a tremendous amount of information from the Crackberry Team, and the posters.  This site reminds me (though MUCH better) of the IRC channels back in 1997, where we really became a community of sorts, and helped each other overcome the day to day issues we faced, with fun stories and those 'D'huh' moments, while learning.

Tell us a little about yourself outside of CrackBerry (hobbies, pets, family, whatever you want to share)

Pets - I have two parrots that I have had since they were each 4 months old (young teenagers now).  They talk English (and occasional screams), and argue with each other!   Where they got that from I'll never know *wink*.  And of course they have their usual food fights, and see how far they can spit the peanut into the other's cage.  They are kids after all!

Blue and Gold Macaw, named 'jafo' after the movie Blue Thunder.  She is the one who will tell chewy (when she is screaming) to 'Stop that' and 'go nite-nite' . Or 'That's enough'.  She also says 'Rubber Baby Buggy Bumpers' among a list of other words and phrases.

Moluccan Cockatoo, named 'chewy' because that's what she does best.  And yes, she can dance to the music too!  She also will talk English and say most of all words that jafo can, plus the 'And I love You!' to me, after all her screaming.  It's hard to keep from laughing at them.

Family - I have three grown children and five grandchildren all in their late teens.  And of course, they are now all older than me (and I'm stickin' to it)!  They are spread all over the United States, so communication via devices is essential.  I do live near my oldest offspring, but devices are still essential there too!


If there is anything else you want to add, please feel free!

I used to be the score keeper, major player, and newsletter author for my nine-ball teams.  Of course by the time the scores where complied and I got home (after being in a bar for the night), the emailed newsletters and stats took on a life of their own, and I became known as 'Chatty Kathy'!  Only funny harmless stories were included of happenings during the matches, and everybody loved to read them in the morning.

Congratulations on being chosen Jafobabe, and thanks for all you do for our community! If you want to nominate someone from the forums to be next month's Member of the Month, send an email to sitesupport(at)crackberry.com with their username and why you think they deserve the honor. Check out previous winners at the links below!