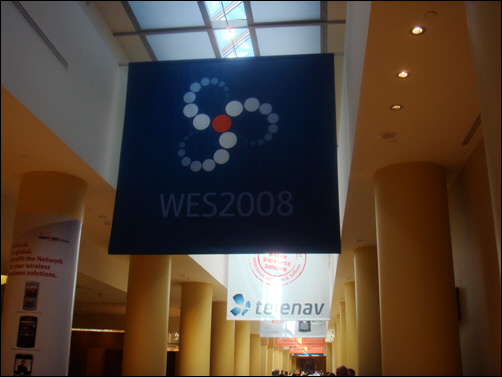 So it's 3:00am Tuesday morning as I type this from my hotel room at the Marriot World Center in Orlando, Florida. I'm pooped and in need of sleep but wanted to bring you all a quick recap of the day's events before catching some zzz's. WES "officially" kicks off in a few hours with the first general starting up at 8:30am, but that doesn't mean there wasn't lots happening on Monday!

First things first, the venue is even bigger than last year. The new wing that was under construction has been completed and WES is taking full advantage of the additional space. I'm not sure of the exact head count, but am guessing the CrackBerrys in attendance should approach or top the 5k mark. For BlackBerry Addicts it's like going to heaven, but for those who haven't experienced the BB lifestyle it looks like a bunch of aliens have descended upon the joint. When I checked into the hotel the helpful Mariott employee remarked how strange it was to see SOOOO many people (as in everybody) walking around with their heads staring down at the floor... apparently that's not a normal ocurrence here for the other 51 weeks of the year. :-)

No surprise, the big news of WES 2008 is the BlackBerry Bold. A special ballroom has been set up to display the next generation smartphone in all its glory. Inside there are several stations (four if I recall correctly) with several devices at each station setup for individuals to get hands on time with. Each station also has a RIM employee or two present to help answer any questions. This room had a strict no camera/no video policy, and since it was the first night I decided for once not to push the rules too far. Sorry for that. I'll be Bolder tomorrow.

While the BlackBerry Bolds on hand are all pre-release versions, I did make some observations in comparison to the eBay 9000 I reviewed. Most noticeable, the Battery Cover now has a textured leather grain to it (vs. the flat plastic on mine) giving the Bold a classy, rich look. I think it's safe to say the #1 Acccessory for the BlackBerry Bold is going to be replacement battery covers coming in different crazy colors. Because the battery cover really makes up the entire backside of the phone, changing up the cover will really change up the phone's overall appearance.

The OS 4.6 software running on these devices is updated from the version on my eBay 9000. The Red Precision themes were removed from the software, replaced with the blue Precision Zen (as pictured in Review Part IV) and a Precision Silver theme (which looked to be a bit under construction still). I also took note that the Games folder was rocking more than just BrickBreaker. Word Mole, Texas Hold'em, Sudoko, and Klondike were also in there. I forgot to check into whether these will be free games or trials which can then be purchased (will follow up on that tomorrow), but either way its good to see. The last thing I made note of in the changes was the web browser. The browser on hand was more beefed up than the version I was running on my eBay 9000. It's still not the full-out browser that we'll see when the device is ready to ship, but its getting there...well on its way there in fact.

In talking with the RIM employees and group of observers on hand, I made a few observations and clarified a few lingering items:

After my tour of the BlackBerry Bold, it was onto the Boxtone Lounge to chill for a bit and await the opening of the Solution Showcase. It was awesome to meet up with my WES friends from last year and finally meet some of the BlackBerry characters I have spoken to via email and BBM for a year but have never had a chance to meet in person. We'll be podcasting it up from the BoxTone Lounge tomorrow from 1pm to 2pm, so come by and say hi.

Once the Solution Showcase opened up, it was PURE MAYHEM. Food, Drinks, Entertainment, Tons of People...basically too much to take in all at once. Over the next two days I will make my way through all of vendors in the Showcase and report back with the items I think will be of interest to the CrackBerry audience.

Once the Solution Showcase shut down (they literally had to turn off the lights to get me to leave), it was to the hotel lounge where the scene was happening. As you can tell by the time of this post, CrackBerry.com represented and pretty much shut the place down. Stories to come in the forums post-WES. :-)

The GANG Minus CrackBerry Kevin...who's taking the picture