CrackBerry Tip: Want BlackBerry PlayBook OS 2.0 on your PlayBook right now? Rip it in half and you'll have 2.0 PlayBook OS's. KEVIN SMASH!!! :-) 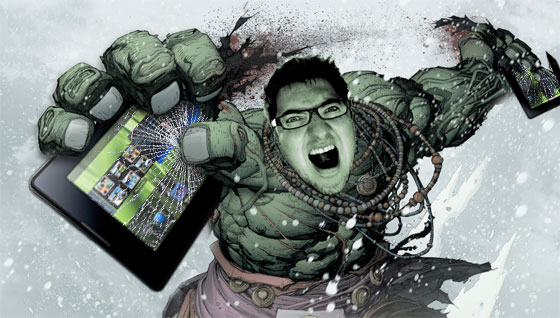 OK, so it's more of a trick than Halloween treat, but you will have 2.0 PlayBook OS's.

I've had quite a few people bugging me on twitter, in the forums, and via email asking me why I haven't done a rant yet on the blogs in regards to last week's announcement by RIM that BlackBerry PlayBook OS 2.0 will be delayed until February (and when it launches it won't have native BBM - to get BBM on your PlayBook you'll have to own a BlackBerry Smartphone and get it via BlackBerry Bridge). Those people felt I've been too easy on RIM on this delay, especially given how much flack I've put on AT&T for not releasing the Bold 9900 yet. So here's my post addressing that (I'm in a ranty mood today since I just bricked my 9900...again)...

AT&T Bold 9900 delay in comparison to PlayBook OS 2.0 delays: Totally different issues. The BlackBerry Bold 9900 could be sold today by AT&T if they wanted to. AT&T is choosing not to release it. They deserve getting a lot of flack as they're really the ones holding it back here (that's what I've gathered from RIM and AT&T sources). Whether it's due to RIM's implementation of NFC or something else (maybe their test units bricked on them?!), they could look past it and sell it right now. Until I get an official statement otherwise, I'm sticking with putting my blame on AT&T. PlayBook OS 2.0 is different. It just isn't ready yet. Ranting won't really help speed up the release.

Reactions to PlayBook OS 2.0 Delays: Obviously it sucks. Especially for PlayBook owners. Judging by some of the action in our PlayBook forums, the anger being exhibited by PlayBook owners reminds me of the BlackBerry Storm days. You have a lot of people who were under the impression that what they were buying will continue to get better, only to find they're being let down continuously. Native email in 60 days... Android apps by the end of summer... a big OS update later this fall... it's understandable why PlayBook owners would be upset here. They have a right to be.

Should RIM do something to make the delays up to PlayBook owners? Compared to the 70 million subscribers affected by the recent BlackBerry service outage, the number of pi$$ed of PlayBook owners is pretty small (probably around 250k... and the number of active daily PlayBook owners is probably half that). Personally I'd love to see RIM do something for PlayBook owners out there as a thanks for the patience sort of message. I'd argue that the average PlayBook owner is still more of the early adopter/enthusiast nature (rather than pure mainstream consumer). Early adopters are the type of people you want to maintain a good relationship with, at any cost. Otherwise, they're the ones who will also become an early abandoner (and early adopter of another platform). I'm not sure what RIM could do here... but something to make up the broken promises would be nice. I actually think more than reparations that PlayBook owners at this point just want to be involved. I think if anything RIM should just let the internal PlayBook builds be available to all PlayBook owners who want it (the DevCon beta build has been updated a few times already, but end users with the build don't get the internal updates). Let us get the updates and at least we'll be occupied until February.

BBX Priorities - the silver lining of hope: Honestly, more than the BlackBerry PlayBook, RIM's priorities right now are getting BBX BlackBerry Smartphones to market. I've said it before and I'll say it again. Right now it's still an iPad market as far as tablets are concerned. Nobody, including Android, has yet to prove otherwise (though I think Amazon's Kindle Fire will likely become the second truly successful tablet). With the phone version of the QNX OS likely to look mainly like a downsized version of the PlayBook OS, the February timeline -- while late for PlayBook owners -- means that BBX phones might actually be a reality in calendar Q1 2012. Fingers crossed we'll see some BBX phones at CES in January and see them get released soon after.

It's All About Execution: For both PlayBook OS 2.0 and BBX Phones, it's really all about execution now. For a long time it's been pretty clear what RIM's go forward strategy is, and leaving DevCon 2011 it's now crystal clear as to what the BBX Platform strategy is. At this point, it's all about RIM buckling down to get the work done and get the products out the door. I have a lot more to say on that subject.... which I'll save for another post. Stay tuned!