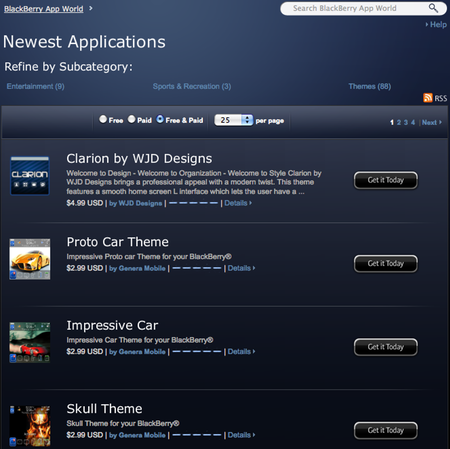 With BlackBerry themes just starting to appear in BlackBerry App World this week maybe it's a little too soon to be running this poll, but honestly, I just couldn't help myself. I want to know what everybody out there thinks. When I opened up App World on my Bold 9700 this morning and found that 8 of the 9 featured items were themes and that themes are already starting to populate the top free and paid downloads categories, I got a bit frustrated. Then when I went to the App World catalog's new page (image above), I found only three new apps out of 102 new additions: 88 themes in the themes category, three apps in the Sports and Recreation Category and then nine more themes in the Entertainment category, which were placed into the Personalization subcategory though I'm guessing their more appropriate location should have been the themes category. One of the things I really like about App World is that it has made it easy for BlackBerry users to find apps. Don't get me wrong, I absolutely love themes, and think it's great for BlackBerry users out there that themes now be part of App World -- there's nothing like a cool new theme to freshen up your BlackBerry user experience -- but do think RIM's implementation of themes within the App World offering may need to be addressed sooner rather than later. More thoughts and poll questions below!

I know from first hand experience (our CrackBerry App Store) that introducing themes into the mix with apps can be a little overwhelming and a little confusing for those browsing. Themes technically are not applications, but for both the CrackBerry App Store and now BlackBerry App World they get treated as if they were one and the same. Theme developers can and do pump out new themes like crazy, which tends to clog up the "new apps" feed making it more difficult to find apps in a sea of themes. And Hot new themes can attract a lot of attention and drive a lot of downloads, which means when you treat an app the same as a theme they begin to compete against apps for those coveted rankings on top download/most popular channels. In a perfect BlackBerry app store world, I've always personally felt that breaking apart themes from apps is the more appropriate solution. That doesn't mean themes should be hidden. On the contrary. Themes are uber-popular and in any BlackBerry app store environment need to receive their fair share of real estate so that BlackBerry owners who want them can easily find them and that those who don't even know about themes can discover just how awesome they can be. I just think that from both a browsing experience and stats tracking/ranking experience, it would be better to separate them.

I also know from first-hand experience that from a backend database management point of view this isn't necessarily an easy problem to solve, especially when themes are being introduced into the mix after apps have already been around for a while. In the case of our CrackBerry App Store (powered for us by Mobihand), improvements have been made to address this historical problem. For example, a few months back we improved the BlackBerry themes category so that instead of it being treated just like another app category it has more in-depth info (best selling themes, new themes, updated themes, etc.). We also introduced the CrackBerry Theme Store client which features just BlackBerry themes. But at the same time, the lingering issue (if it you consider it to be an issue) is that in the main app store you still see themes intermixed and treated the same as apps. Now while this may not be the ideal solution from my personal point of view, I think our typical CrackBerry reader/customer is pretty savvy and deals with this quite well and by now is simply used to it. There's always room for improvement, but it works.

From my observations, it seems that with RIM's introduction of themes into App World they're going to face these same sorts of issues which we have experienced (I already see the issues, and App World's theme catalogue is still small), but worse. I know for me personally it has already killed the App World experience. And remember, I'm a theme lover. There's a lot of people out there who don't like themes or simply won't buy themes (or download free ones for that matter), so I would assume their reaction would be even less favorable than mine. Maybe instead of combining themes and apps together RIM could add an icon into the application beside Categories called themes, which when clicked duplicates App World within the app but treats it as Theme World (featured themes at the top, with theme categories, top free themes, top paid themes, etc. below).

I think there must be a win-win App World design solution to be had that's favorable for both theme developers and app developers, where instead of competing they're more peacefully co-existing side by side, both attracting a ton of eyeballs and downloads/sales still, but in a way that makes for a more friendly and targeted browsing experience. I'd really be curious to hear from some BlackBerry app developers if their daily downloads/sales have dropped as a result of the introduction of themes to App World. My educated guess is that they have, at least for some vendors. For example, if you had an app in the top 25 that now got pushed off the list by a theme entering the 25, your app's downloads would surely drop. But with proper segmentation, you'd be able to have both that app and that same theme get the same (or more) amount of downloads/sales in a day, instead of one cutting into the other. Leaving that theme off the Top 25 Apps list but then having a Top 25 Themes list would likely result in better download/purchase stats.

That's my take on it anyways, with some rough ideas for alternatives. Maybe I'm seeing an issue where one doesn't exist and I'm the only one who thinks there's room to improve it. I just want to see the best solution for all stakeholders in the BlackBerry ecosystem (device owners, theme developers and app developers, etc.). So with that, feel free to express your thoughts on the subject with the poll questions I've set up below or leave a comment and let me know if you agree with me or if I'm on crack(berry). And with all this talk about themes, I think I'm going to go right now and find me a nice new one for the holidays!