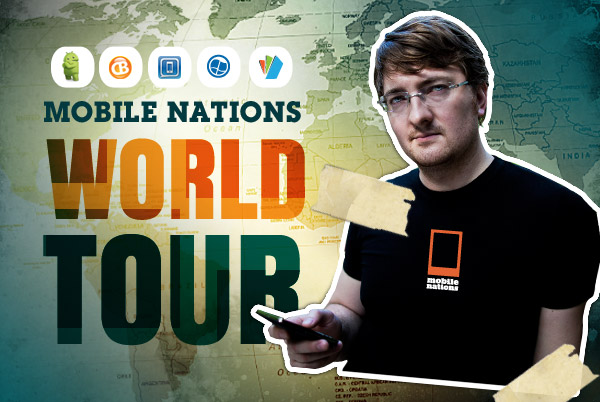 I'm excited for BlackBerry 10. It's torture waiting for it. Unfortunately, it's still a few months away and between now and then we are not expecting to see much from BlackBerry in terms of new devices (though I did just grab a new Curve 9320 that I'm going to do up a review on).

That being the case, I'm going to turn the next few months of waiting for BlackBerry 10 into a productive activity that will make me an even better BlackBerry blogger. In the past we've held an event called the Smartphone Round Robin, where the editors of our different sites spend some time using and reviewing the competition from the perspective of their platform. Later this year, once the iPhone 5, BlackBerry 10 and Windows 8 phones are available, we are going to hold a similar cross-site event.

In the meantime, you can think of the Mobile Nations World Tour as a simliar-yet-different one man version of this. I'm not so much going to review the competitors -- we have plenty of awesome reviews on our other sites for that -- but I'm going to become an expert on all of them and highlight some of my insights here on CrackBerry in various ways. It'll be fun. It will also add even more validity to my opinions, as they will be based not just on knowledge, but on real life experience. I'm sure it'll make our first BlackBerry 10 review that much better. And the extra non-BB experience will help with all those Switching to BlackBerry 10 articles I'll have to write. ;)

When it comes to the other mobile platforms outside of BlackBerry, I've *tried* to stay on top of things over the years. I'll typically buy the new iPhone when it comes out, and I've picked up the odd Android phone to see what's up. I even bought an HP Touchpad when the prices got slashed. But typically I use these phones/tablets for a day or two and then they just sit and collect dust or I ship it off to another member of the Mobile Nations team who will put it to more productive use. I never fully commit.

In addition to keeping the BlackBerry 10 excitement going strong on CrackBerry, with the Mobile Nations World Tour I'm going to bounce around and immerse myself in each platform. Android. iOS. Windows Phone. Heck, even webOS. I'll try them all. I'll learn where they do it for me and where they do not. I'll drop by our sibling sites for some advice and tips. Heck, maybe I'll even be a guest on their podcasts. I'll let everybody do their best to sell me on their platform.

But don't worry, I won't get converted. I know what I love about the BlackBerry experience and I have strong convictions of what makes a great mobile experience - which is why I'm so excited for BlackBerry 10 (after seeing the preview at BlackBerry World, I kind of feel like they're building it for me). Also, I don't want anybody to be alarmed. If you see me tweeting from a non-BlackBerry device, I don't want to be seeing any comments of "traitor!" Lol. Phil, Dan, Rene and Derek and I all decided the Mobile Nations World Tour concept is a good thing. So while I'm the first to embark on the journey, you can expect all of our EiCs to go on their own World Tour at some point.

As for where I'm touring first? That'll be Android. Trying out the HTC One X. Stay tuned for more!